Midwest heat wave pushes prices back above $7 per bushel.

By Dennis Halladay, Western Editor
Uh-oh, they're back.

After a quiet enough spring, corn prices roared back to life this month and shot past $7 per bushel as scorching temperatures and dry skies withered fields in America's Heartland. 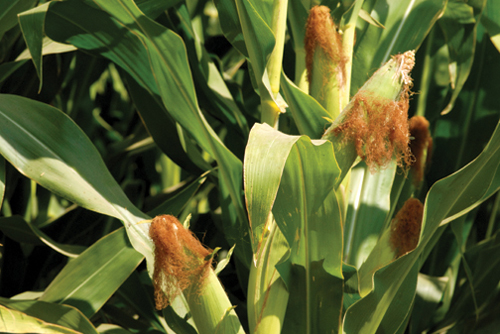 Farmers, dairy owners and other livestock producers are now holding their breath. If rain somehow manages to arrive in time, much of the corn and soybean crops may be saved, although yields appear destined to suffer no matter what.

More expensive corn and other feeds will be a disaster for milk producers, who were already gasping for air from a cost:price squeeze caused by low milk prices .

Our hats are off to anyone who had the vision to book corn between May 29 and June 4, when wholesale prices reached their yearly lows of less than $5.60 per bushel. On July 9, they traded as high as $7.77.

Prices soared that day in particular, in response to a double whammy of bad news that trumped USDA's June 29 crop report saying that more acres of corn were planted in 2012 than anytime in the last 85 years.

The first hit was an announcement by the National Oceanic and Atmospheric Administration saying that July 2011 to June 2012 was the hottest 12-month period in the U.S. since records started being kept in 1895.

The second was a USDA report about the sudden and sharp downgrade in the quality of the corn crop. Things look especially bad in Indiana and Illinois, both top five corn states. USDA said 61 and 48 percent of their crops, respectively, were in poor or very poor condition.

Two days later, on July 11, USDA made a massive downward revision in its estimate for 2012 corn crop productivity due to the Midwest drought. It is now projecting 146 bushels per acre, down from 166.

All the while, constant TV and newspaper reports of shriveled crops, muddy lake beds and heat-related deaths have stoked concerns about the prospect of further corn price increases this summer, making it tough to find any optimism anywhere for feed prices..
Related