USDA Secretary is worried that a dysfunctional Congress might actually let it happen.

Time is running out fast on what USDA Secretary Tom Vilsack (pictured here) thinks would be a Medusa-headed disaster for U.S. milk producers if a new farm bill is not passed this year. 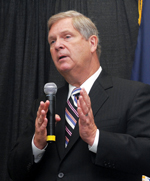 At a press conference last week at World Dairy Expo in Madison, Wis., the Secretary made no attempt to hide his frustration with the political dysfunction that has hog-tied Washington this year. He warned that if a farm bill isn't passed by December 31, dairy producers and consumers will awake New Year's morning to milk prices never seen before and market mayhem that would not be pretty. Estimates vary of what Class III prices would be, but he gave a range of $39 to $50.

The 1949 Agricultural Act established the parity system that set a floor on farm milk prices via support prices the government paid for surplus butter, powder and cheese. Parity is an inflation-adjusted index to the cost of a basket of goods and services encountered by dairy producers from 1910 to 1914. USDA Secretaries had discretionary authority to set Class III milk prices at between 75 and 90 percent of parity.

Parity was replaced by a fixed price system in 1983, but failure to pass any new five-year farm bill by December 31 means that dairy support pricing automatically reverts back to the parity system. Vilsack's worry that such an absurd situation could happen is both an indictment of the do-nothing attitude that has crippled politics in 2012 and a warning that it could really happen.

One reason is the presidential election. Regardless of who prevails, sorting out the winners and the new playing field will take time. Is it likely that legislators will get back to serious work immediately? Will an atmosphere of compromise and cooperation magically return?

Reason number two is the House of Representatives which has not yet passed a farm bill (the Senate has). The House goes back to work November 13 and will adjourn for the year on December 14. With a week off for Thanksgiving, that leaves just 16 total postelection working days.

Reason number three is the budget deficit. Its significance depends upon how serious lawmakers are about cutting spending and whether they think agriculture amounts to more than a drop in the government's ocean of red ink.

Government purchases of surplus dairy products will undoubtedly soar if milk prices jump to $39 or more. The question is, would the projected cost for however long it took the House and Senate to finally agree on a farm bill be enough to motivate them to act quickly or would it be an excuse to keep dragging their feet?
Related

I am one biased farmer
HD Notebook
Related to:
HDN, milk prices
In HD Notebook