2012 was another banner year for Jerseys

It is becoming an old story, but one that never gets old for the Jersey breed: it is on a roll. 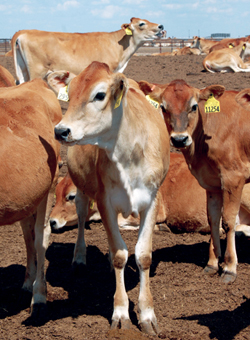 According to data just released by the American Jersey Cattle Association (AJCA), the number of Jerseys on Dairy Herd Improvement (DHI) test in 2012 rose for the ninth straight year and their actual average milk production set a new all-time record for the second year in a row. In addition, the number of new animals registered was 103,345, the first time ever over 100,000 and the fourth new record in five years.

Where is this growth coming from? The West. In 2012 it was also almost entirely from one state: Texas. Lone Star dairies added an astounding 35,209 new Jerseys, a 338 percent increase, and Arizona added 6,869, a 241 percent gain. Idaho was left in the dust with "just" a 32 percent increase of 3,276 head. The six largest states for Jersey DHI enrollment are California, Texas, Oregon, Idaho, Wisconsin and Arizona.

Market-based milk pricing and commercial competitiveness is what is fueling this growth. The Jersey breed's actual production is just 16,736 pounds, but on a 3.5 percent fat-corrected milk equivalent basis the average is 20,177 pounds.

"For 2012, Jersey milk was worth from $1.59 to $3.52 more per hundredweight than the statistical blend price of Federal Order and California markets tracked by National All-Jersey Inc.," says AJCA Executive Secretary and CEO Neal Smith. "So, because Jerseys produce milk's most valuable components with less feed, water and energy, breed back earlier and stay productive longer, there is more profit from dairying with Jerseys."
Related

I am one biased farmer
HD Notebook
Related to:
HDN, Jersey, breed news
In HD Notebook