A dairy farmer in England is getting cheers for his Black Cow home brew.

By Dennis Halladay, Western Editor
Whey, the liquid by-product of cheese making that is often disposed of as waste, is being made into vodka by a large-herd dairy farmer in England. No kidding. 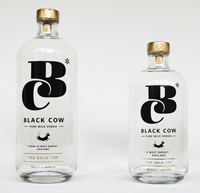 Naturally, the mere fact he is doing it has been great fodder for headlines and news reports across Europe. But it's not just a publicity stunt; those same stories say the stuff is actually pretty good. In fact, Black Cow Vodka has already made a fan of actor Daniel Craig, the current James Bond star.

The self-taught distiller is Jason Barber, 47, who operates a 250-cow dairy in Beaminster, in southwest England. He is clearly not only an inventive chap, but a talented one, as well. Barber is a longtime cheesemaker who won the World Cheese Awards Cheddar Trophy in 2012.

He got the idea for using whey to make vodka after he saw a TV program about people in Serbia making vodka from yak milk.

Whey from his cheese making is saved and fermented using a special yeast, which turns whey sugars into alcohol. It is then distilled and treated - Barber says the process is a secret that took him three years to develop - and then triple-filtered and bottled.

Although gin is vastly more popular in England, Black Cow Vodka has made fans of customers at two posh restaurants near London that are owned by high-profile celebrity chefs. And the reviews haven't been bad either.

"OK, so vodka made from milk doesn't exactly sound enticing," said a recent review by food and drink critic Tom Parker Bowles in a Sunday edition of The Mail. "But Black Cow Vodka is one of the most remarkable things I've ever tasted - wonderfully smooth and beautifully rounded. It makes a Dirty Martini you'll never forget."

A showring recap from a 4-year-old
HD Notebook
Related to:
HDN, dairy products
In HD Notebook