Dairy feed cost situation is night and day different from a year ago.

By Dennis Halladay, Western Editor
The West is scorching, yet much of the Midwest and East are soggy. And while crops there generally got a very slow start, high soil moisture levels are nonetheless driving rosy harvest outlooks for major dairy cattle feeds through the roof.

As a result, futures prices for corn, soybeans and wheat have plunged to levels that dairy producers could only wistfully dream about this time a year ago.

As seen in this table from the CNN.Money website on July 2, fall delivery contracts at the Chicago Board of Trade for all three commodities closed at or near their 52-week lows. 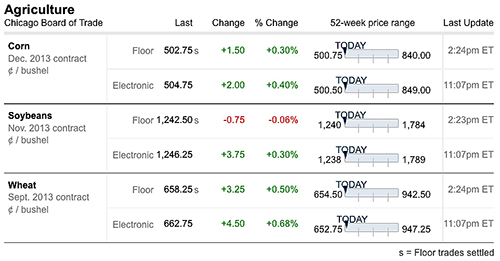 Had anything even remotely close to them been available to milk producers a year ago, many of those who were forced out of business might still be here today.

The magnitude of the price turnaround is remarkable. Corn now costs a third less. Soybeans and wheat are more than a fourth less. An equal-parts ton of all three feeds that cost $399 at their highs a year ago would have cost just $268 earlier this week.

But that's just half of the reason why milk producers are doing much better this year. Higher milk prices and drastically better margins are the other half. The June Class III price last year was $15.63 per hundredweight; this year it is $18.02.

Summer has just begun, though, so there's still plenty of time for things to go wrong.