By Amy Harding     Steve Nickerson     Felicia Kautz     Lane Ely And   David Hurley
The authors are in the University of Georgia's Animal and Dairy Science Department.

Bred heifers represent the future of the milking herd in all dairy operations, and it is critical that udder health be maximized to ensure that these young animals freshen free of mastitis. During a heifer's first gestation, udder infections compromise the development of milk-producing tissues. In the case of Staphylococcus aureus mastitis, milk yield is reduced by 10 percent over the first lactation, and milk quality is lowered due to a rise in the SCC. In the worst case, mammary tissue is replaced with scar tissue, causing the heifer to calve with a blind quarter.

Research has shown that more than 90 percent of breeding age and bred heifers can develop mastitis caused by coagulase-negative staphylococci (CNS) and S. aureus. Therefore, an udder health program should be in place to eliminate existing cases of mastitis and prevent new ones so that heifers calve free of mastitis with a low SCC.

Use of dry cow antibiotic infusion products during mid-gestation in heifers has been successful in curing existing infections that develop in the immature mammary gland and in preventing new ones that occur in late gestation. This practice is off-label, so it requires a valid vet-client-patient relationship.

Likewise, infusion of internal teat sealant barriers have been shown to prevent new infections at calving when applied approximately one month prior to freshening. When used together, the combination of dry cow therapy plus teat sealant may be more effective in controlling mastitis in these young animals.

To test this, all four quarters of 38 bred Holstein heifers at the University of Georgia Teaching Dairy were treated randomly 30 to 60 days prepartum as follows: 1) untreated control; 2) dry cow therapy; 3) teat sealant; or 4) dry cow therapy plus a teat sealant. When heifers calved, milk samples were collected from each quarter to monitor infection status using microbial culture, and SCC tests were performed in order to determine if the various treatments were successful in curing or preventing mastitis.

Culture results demonstrated that, compared to untreated control quarters which had a cure rate of 58.3 percent, treatment with dry cow therapy or dry cow therapy and a teat sealant resulted in a 100 percent cure rate in quarters infected prepartum. Treatment with a teat sealant alone resulted in a 75 percent cure rate, but the difference was not significantly higher than the controls (Figure 1) below. 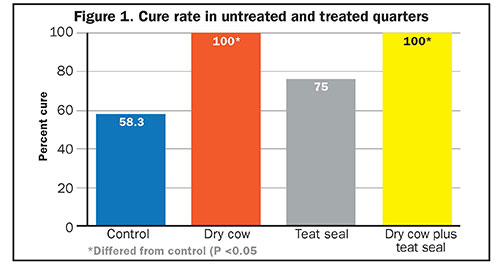 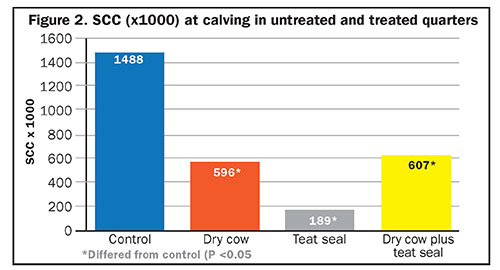 Although it was believed that treatment of quarters with dry cow therapy, a teat sealant or the combination would help to prevent new infections at calving, no differences were observed compared with untreated controls (Figure 3) below. This suggests that, if quarters are uninfected prior to calving, leaving them untreated is as effective as treatment with dry cow therapy, a teat sealant or the combination. SCC values were similar across all four treatments shortly after calving.

It must be kept in mind, however, that the majority of bred heifers will most likely have at least one quarter infected with CNS or S. aureus, and treatment with dry cow therapy is very effective in curing these infections. So, if first-calf heifers are freshening with an elevated SCC or if mastitis is diagnosed at this time, dairymen should develop an udder health plan in conjunction with their herd veterinarian to administer dry cow therapy to all bred animals during gestation but no later than 30 days precalving to prevent residues.

The added benefit of a teat sealant is that previous research has shown it to be effective in preventing new infections caused by environmental pathogens that invade the teat canal of heifers just prior to calving.

Your bred heifers are your future milk producers. A heifer with staph mastitis will yield 10 percent less milk than an uninfected herdmate over her first lactation; that's the difference between a 19,800-pound and a 22,000-pound producer!
151010_637

Bulk tank milk turns up “hot” for many reasons