We may be wise to consider more than just quantity of resting time when it comes to our cows.

By Jessie Kull And   Peter Krawczel 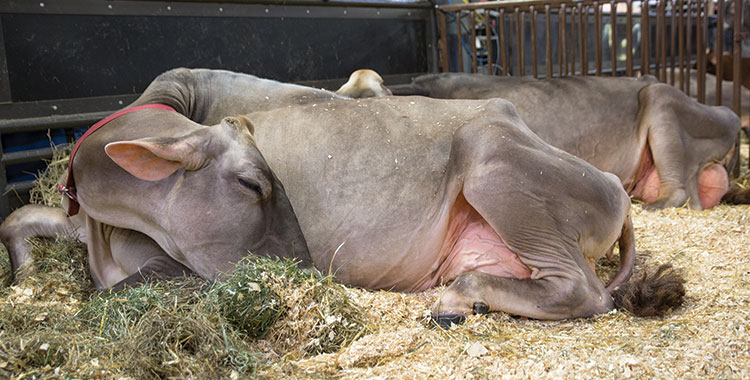 This cow is in a lying position, which is often associated with sleep. Time spent sleeping may affect cow health, production, and welfare more than we realize.

The importance of cow comfort and its relationship with lying behavior has become widely accepted. More recently, work from the Swedish University of Agricultural Sciences and the University of Helsinki demonstrated that cows spend a portion of their lying time actually sleeping.

Understanding sleep in dairy cows may lead to a focus on strategies that promote or hinder sleep. This may shift the focus of lying time to quality rather than quantity, as there is likely a link between lying time, sleep, cow health, welfare, and productivity.

The stages of sleep

Drowsing is the state of alertness that occupies the gray area between fully conscious and asleep. In cows, this state is generally evident from a quiet resting posture with eyelids relaxed. Cows spend approximately a third of their day drowsing or in “quiet wakefulness.” Rumination often coincides with drowsing and NREM sleep, with NREM sleep representing a less vigilant state.

NREM sleep serves a restorative function, so it helps with energy conservation. Physically, NREM sleep is typically characterized by cows lying down with their head raised, which makes it hard to distinguish this stage from other vigilant states.

Opposed to NREM sleep, REM sleep can be identified by reduced muscle tone, specifically in the neck in dairy cows, as well as rapid eye movements and muscle twitches. REM sleep provides the body the ability to generate a stronger immune response the next time a pathogen is encountered.

Previously, sleep was thought of as a continual progression from an awake state to NREM and then finally REM sleep. However, research suggests adult cows do not always have a predictive progression of sleep stages. In fact, they are equally likely to progress from one to any other vigilant state.

In 1972, researchers from the national veterinary school in France were the first to study sleep in dairy cows through surgically-implanted electrodes in the skull. They determined that dairy cows spend 10 to 12 hours lying down, of which four hours are spent sleeping and nearly eight hours are drowsing. Newer research suggests cows housed inside a barn have a diurnal sleep pattern, meaning most of their sleep occurs at night when the barn is least disruptive. However, this may not always be the case when management activities, such as milking or feed delivery, are taking place.

The proportion of time cows spend in each vigilant state may be more influenced by their age (for example, cow versus calf) or stage of lactation rather than by a strong diurnal pattern. For example, researchers in France established that cows can achieve NREM sleep standing up, but REM sleep can only be achieved lying down. The same goes for rumination; cows can engage in NREM sleep while ruminating, but not REM sleep.

There were efforts to follow up on this with researchers from the University of Helsinki studying noninvasive techniques of predicting vigilant states in group-housed calves. Of all observations (90 hours and 30 minutes), calves slept 25 percent of the time with roughly 50 sleep bouts, each being longer than 30 seconds as this was the criteria determined by the researchers. Specifically, they were in NREM sleep 55 percent of the 90 hours recorded and REM sleep 45 percent of the time with each sleep bout lasting only two or three minutes each. They also determined the various vigilant states in calves could be differentiated based on resting postures.

Researchers from the Swedish University of Agricultural Sciences determined this was not the case for adult cows. There was no way to separate drowsing and NREM sleep in cows relying strictly on behavioral estimates because the same posture is displayed for both sleep states.

Drowsing was not observed in calves. It was speculated that 12-week-old calves might not have a need to drowse, as they may sleep longer than adult cows.

Behavioral estimates drastically overestimated the time cows spent in REM and NREM sleep when compared to the polygraphic EEG data, which measures brain activity. They concluded that different sleep states can be distinguished from evaluating polygraphic EEG data from the noninvasive surface electrodes.

Not only do sleep patterns differ by age but also between stages of lactation. Researchers observed that cows in early and peak lactation slept less in a 24-hour period than cows in their dry period. One possible explanation for this is that when cows spend more time eating, there is less time for other activities such as sleep. However, cows in their dry period have longer NREM sleep, while cows in peak lactation have longer REM sleep. The uptick in REM sleep in peak-lactation cows could be compensating for the total reduction in sleep time that occurs after parturition due to the rise in energy requirement and dry matter intake.

While there are still many questions to answer about sleep in dairy cows, from what we already know from other species, sleep is likely critical to welfare. For example, mice exposed to a 24-hour sleep deprivation had a drop in B lymphocytes. One potential downside to this reduction is that the body relies on these cells to generate a strong response when exposed to a “known” pathogen. In general, the body goes through a proinflammatory state at night when you are asleep, but during the day when you are awake, it promotes an anti-inflammatory environment.

Even a few hours of sleep deprivation elevates the risk of cardiovascular disease, cancer, and the common cold in humans. From a dairy animal standpoint, sleep deprivation will likely alter immune function causing cows to shift resources away from production.

Stall availability, stall design, and social hierarchy are just some of the factors that can affect the amount of time cows spend lying down, but it has yet to be established how these factors influence sleep. Lying time has the potential to impact milk yield and production, but the next step is to understand the dynamic between duration of lying and total sleep time. As data continues to build on the importance of sleep, strategies that can improve health, welfare, and overall production should be factored into management decisions.