Cows should do three things 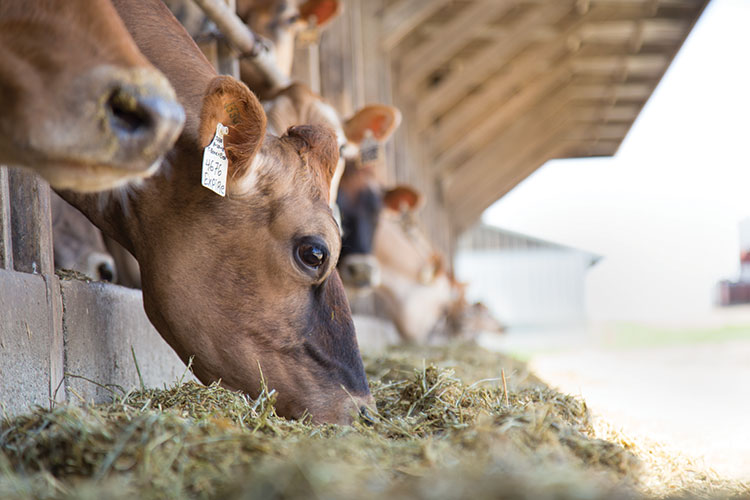 Cows are prey animals and because of that evolution, feed them early in the morning so they can eat and then rest and ruminate.
Eliminating bottlenecks and organizing people are how you fix problems on a dairy,” said longtime dairy veterinarian Gordie Jones to those attending the 13th Western Dairy Management Conference in Reno, Nev. “By focusing on the ABC’s with cows — air, bunk, and comfort — we can do the most good for cows throughout the day,” he went on to say when discussing milking, eating and drinking, and resting time.

Jones based his comments on a vast arsenal of personal experience he gathered over the years. Early in his career, Jones spent 15 years in private practice as a dairy veterinarian based out of northeast Wisconsin. From there he became a dairy nutrition, facility, and cow comfort consultant for an international agricultural company. After that 10-year stint, he moved on to the well-known Fair Oaks Dairy where he helped design and manage the 20,000-cow Indiana dairy. And five years ago, he built and began managing his own dairy farm . . . Central Sands Dairy named after both its Wisconsin geography and topography.

The absence of stress

“With cows, high production is the absence of stress,” said the cow guru. “What needs to happen to achieve 100 pounds of milk per cow per day?” he asked rhetorically in his booming voice. “Cows should spend no more than four hours away from feed, water, and stall beds,” he said answering his own question. “And 50 percent of the average dry matter intake should take place after cows exit from the parlor in the morning. It fits with the cow’s evolution.”

The evolution that Jones is talking about goes all the way back to human history when man domesticated cows in Mesopotamia or today’s modern day Iran and Iraq. The relationship began at the dawn of agriculture when man built fences to keep cows out of grain fields. Those cows that found ways to break through fences gave the genesis to the relationship between cows and humans. Of the world’s bovines, humans domesticated 11 species. And the rest, they say, is history. Except for the fact that cows at their very nature remain a prey species.

“The ancestors of the modern cow were prey,” said Jones. “Cows are designed to eat as much as they can first thing in the morning, and then move to a safe location to lie down and chew their cud. To accomplish this objective, every farm team should be delivering 105 percent of the ration in the morning,” he said, one upping his early statement about delivering 50 percent of the ration in the a.m. “After that, feed should be pushed up every two hours.

“It’s very important to feed the best feed to your cows,” said Jones. “Silage loses quality when exposed to air, so the first feed mixed in the morning should go to the low-production pen. Then, the fresh cows can have the freshest feed that morning.

“Another common mistake is not having enough waterers in freestall barns. Many freestall designs have three waterers when there really should be four,” said the veterinarian. “If there are more than 100 cows in a barn, they typically divide into two social groups, and each social group should have two waterers.”

“The four hours away from feed also needs to include such things as sorting cows, time in holding pens, breeding, hoof care, palpation rail time, and other herd health work,” Jones said.

“Bottom line, if I can get your cow to go to bed for one extra hour with a full stomach, she will give 3.7 pounds more milk, on average,” he went on to say in reconfirming the importance of meeting the cow’s time budget. “I will not overcrowd the close-up and fresh cow pen,” Jones said. “Only overcrowd other pens by 10 percent,”

In going back to comfort, Jones turned his focus back to facility design.

“If you want to reduce somatic cell counts (SCC), be sure your cows lay square in the stall bed,” said Jones. “Cows should lie square and straight, then the cows will be clean,” he further explained when discussing the mix of facility design and milk quality.

To accomplish this goal, freestall design plays a crucial role. “The four main reasons for ‘freestall fails’ are lack of cushion, neck rail placement, lunge and bob space limitations, and lack of fresh air and vision,” he stated.

When it comes to freestall design for Holsteins, parameters include:

“Wider stalls are often not better because cows lie diagonally in the stalls. That causes them to defecate on the stall instead of the alley. That in turn causes cows to lie in their own waste,” said Jones.

“If cows are lying diagonally, the freestall setup can sometimes be corrected by putting 2-by-4 pieces of wood on the side rails to prevent the cow from putting her head through,” he advised.

“If a 30-inch loop is used with forward lunge, width is not as important. But a 39-inch loop from top to bottom lets the cow lay diagonally and may need some modification,” said Jones.

“Bedding must be maintained . . . level with the curb for the curb width to be ‘usable.’ Once the bedding drops below the curb, the usable bed length becomes 8 to 10 inches shorter and that is unacceptable to the cow,” he said.

“A person should be able to fall to their knees in the area where the cows lie down and not experience pain,” said the veterinarian turned full-time dairyman. “If it hurts to do that, then the cow needs more padding and/or bedding.”

Jones is a big believer in sand for both cow comfort and milk quality.

“There are one-quarter million cows being closely evaluated on a study being led by the University of Wisconsin’s Pam Ruegg,” noted Jones. “Sand not only improves milk quality but cow comfort, too . . . so much so that cows will produce six more pounds of milk when compared to cows not on sand bedding.”

While Jones prefers raising calves in hutches, he did explain one consideration when weaning approaches.

“When we put calves in hutches, they lose their ability to be herd animals,” he said. “Bring them back to small herds via small groups. To help facilitate that transition, calves should come out of hutches in even numbers as it helps with the social status and herd mentality,” as he went on to say calves pair up and find buddies.

Jones brought the entire discussion down to two final points.

“As herds get bigger, what rules still apply?” asked the veterinarian with four-plus decades of practical experience.

Progression, not perfection, makes us — and our cows — happy
Features
Related to:
features, management, animal care
In Features