Master the cognates to bridge communication

Shared words can help every dairy develop a distinct language that English and Spanish speakers can communicate in. 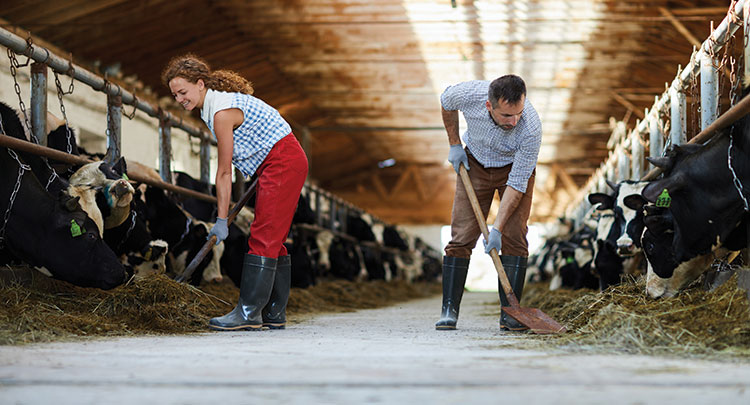 Referring to fine sand as “fino” and coarse sand as “grava” is one way cognates and semi-cognates can create clear communication
It’s safe to say that “Master of the Cognates” is the greatest name given to a heavy metal band. That being said, becoming a “Master of Cognates” on your own dairy may not improve your musical talents, but it definitely could eliminate confusion among your non-English speaking employees.

Cognates are words that appear in two different languages. The word sounds similar and has the same meaning. For instance, “hospital” is the same in Spanish as it in English. It is a perfect cognate. I learned this one early on.

One day, I was pointing to the hospital group after treating a mastitis cow and turned to my Latino assistant and said, “Okay, put her with the treated cows.”

He looked at me with a very confused look. So, I repeated and pointed toward the hospital pen and said, “The treated cows, put her with the treated cows.”

Again he looked confused, took the cow and started opening gates that didn’t lead to the hospital but rather opened the gates toward the outside. Apparently, he thought I was saying, “Three dead cows, put her with the three dead cows” instead of “treated cows.” That being the case, he was taking her out to where the rendering truck would pick up, which at the time was absent of any dead cows.

Like all these countless episodes over the years, we had a great laugh. To clear up the confusion for future situations, I simply asked my co-worker what name we should give the pen of treated cows that would be easier to understand for the non-English-speaking employees.

He gave me a few different options before he said, “Grupo de Hospital.” Boom, for the rest of my career it became the “hospital group.” Furthermore, I learned that “group” was a better way to describe a group of cows than “pen” because group is very similar to groupo, the Spanish word for group.

Bear in mind, however, that despite hospital having the same definition in both English and Spanish, they’re pronounced differently. My good friend and former co-manager, Chema Ortiz, pointed this out to me when I was asking for his thoughts on using cognates.

Ortiz is fluent in both Spanish and English. He shared with me that if you approach a person who speaks zero English and you quickly say “take her to the hospital,” there’s a real chance the person won’t understand you. You still have to speak clearly and slowly . . . maybe use hand gestures . . . until you know you’re both on the same page.

The next step beyond using cognates is to use what I call “semi-cognates.” Semi-cognates are words that have the same definition and have very close pronunciations in two different languages. “Pump” in English and “bomba” in Spanish, for instance. However, “trailer” and “trailer” is a cognate.

Here’s another example. Naming the machine you use to put sand in the stalls the “sand trailer” is easier to understand for a Spanish-speaking employee than the “sand buggy.” Imagine if you’re learning English and you hear the word “sand buggy.” You may assume a sand buggy is an insect that might bite you at the beach. While it’s a humorous mental image, that is the reality of someone trying to learn a new language.

The key to using cognates and semi-cognates is to have the open conversation with your staff to find the list of words you both know. Not only will they be more apt to use the words that you decide on, but it will open up the door for even more bilingual communication.

I also learned that it’s perfectly okay to say, “Nope, I’m never going to remember that word in Spanish, it doesn’t sound like anything in English. What are some other words we could use?”

Case in point. I remember going to the feeding staff and asking what word we should use for “mix.” Most of the guys were somewhat bilingual, but I wasn’t doing a good enough job in establishing mixing times for the various loads. The guys started rattling off different words in Spanish that meant “mix.” I couldn’t really make a connection to any of them and kept telling them to think of other words.

One of the guys mentioned the word “bate” (bah-tay) and my ears perked up. My daughter was 3 years old at the time, and I had seen every episode of Dora the Explorer at least 4,397 times. Dora would go to her grandma’s house to make cookies and sing “bate, bate, chocolate,” which meant to “stir the chocolate.”

As a group, we decided that “bate” would be the word we would use instead of “mezcla”, despite it not necessarily being the correct translation or the best definition. As for my connection to this learning moment, please don’t judge me. If you’ve ever had toddlers, you can probably sing entire verses of “I love you, you love me” by Barney, the purple dinosaur.

It sounds strange, but in time you’ll almost develop your dairy’s own language as you add bilingual vocabulary that you’ve developed with your staff. The importance of using these words consistently is vital.

In other words, if you’ve decided that the task of pushing manure from the freestall barn is “limpia el corral,” then that’s what it is. It can’t be “scrape the pen” today and “push the manure” tomorrow.

In my own experience, we had to figure out a way to differentiate the coarse sand and the fine sand that came out of the sand recycling system. We had to often times change how we managed them given how clean we were able to get the two products.

The fine sand was easy for me to name because “fine” in English is “fino” (fee-noh) in Spanish. The challenge was the coarse sand. The correct word for coarse is “tosco,” but I couldn’t come up with a connection with “tosco” and coarse sand.

We ended up naming it “graba” because it was the Spanish word for gravel. Both English and Spanish-speaking employees could associate that the coarse sand resembled gravel, and therefore we agreed to call it “graba.”

Furthermore, we would refer to the machines that separated the sand as the “separator” and the “cyclone” as opposed to the “sand reclaiming auger” and the “hydrocyclone.” That’s because in Spanish they would translate to “separador” and “ciclon.”

Using cognates and semi-cognates to develop your dairy’s distinct language is a simple way to help bridge the gap between the different languages spoken on the dairy. It shows you’re making an effort and shows a level of respect for the people who are not fluent in English. Even if you’re never able to join a heavy metal band, you can still be a “Master of the Cognates.”

Common Threads - May 2022
Features
Related to:
features, employees
In Features