Dairy can design its future

While 2020 should be an up year economically, challenges remain for dairy. 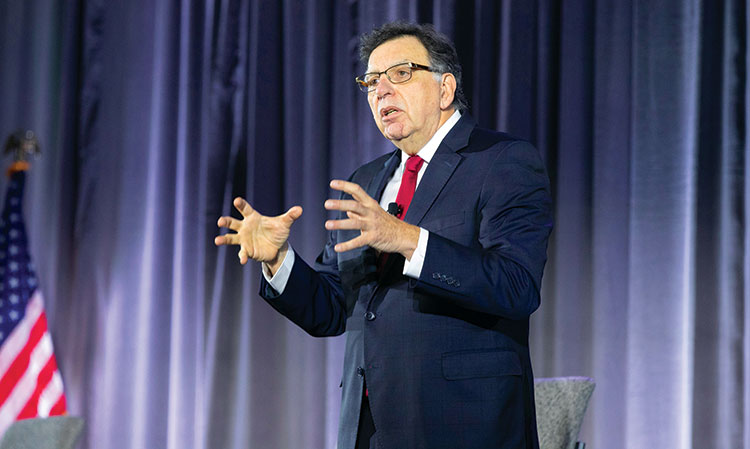 “Unity doesn’t mean don’t question, don’t challenge, and don’t ask hard things,” said Tom Gallagher. “Yeah, let’s argue, let’s disagree, but let’s do it together, and when we make a decision, let’s go and not let the activists divide us. Through unity and leadership, we will secure a strong dairy future.”
Trade, immigration, and dairy product sales garnered the lion’s share of the discussion at this year’s annual gathering of the National Dairy Promotion and Research Board, the National Milk Producers Federation, and the United Dairy Industry Association. Part of the sales discussion centered on attacks from anti-animal agriculture groups.

“When we are facing tough times, it’s easy for our opponents to attack us,” commented Jim Mulhern, president and CEO of the National Milk Producers Federation (NMPF). “Our opponents have spun a narrative of the ‘Death of Dairy.’ It’s not true,” he told those attending the meeting in New Orleans, La.

“Dairy is a growing sector with bright days ahead,” continued Mulhern. “We’ve seen tough times . . . however, we have a powerful future,” said the dairy leader based out of Washington, D.C.

“Central to our core resilience is getting out our story. Dairy consumption is at a 56-year high,” explained Mulhern, who heads the federation of dairy co-ops. During the annual meeting, leaders cited USDA data that U.S. per capita consumption has climbed by 73 pounds since the dairy checkoff began in 1983.

Dairy is a strong category with over $100 billion in annual retail sales. Dairy Management Inc. (DMI) President Barb O’Brien cited consumer research showing cheese is in 98 percent of U.S. homes, and dairy milk is in 94 percent of homes.

“This puts to rest the naysayers’ claim that dairy is dead,” said O’Brien. “Dairy is alive and well and in households across the country.”

These days, that’s not the narrative being put out to the public by anti-checkoff and anti-animal agriculture groups. DMI’s CEO, Tom Gallagher, contends these groups want to see dairy farms simply go away.

“We’re done taking it,” Gallagher said of the groups attacking animal agriculture. “These anti-animal agriculture people aren’t going to defeat you,” he told the 800-plus dairy farmers and associated industry staffers attending the meeting.

To be sure, the pace of change continues to quicken.

“If you’re not changing, then it’s time to get out of the way and let someone else take the leadership role,” advised Simon Vander Woude, a California dairyman who chairs the California Dairies Inc. (CDI) dairy cooperative.

Gallagher concurred, “Let’s design our dairy future.” He then went on to explain that Kodak lost its market share when it didn’t embrace evolution within photography, and that taxi cabs have lost significant market share to Uber and Lyft.

As for the future? It definitely involves dairy product exports.

“When we started the U.S. Dairy Export Council (USDEC) in 1995, not many people were for it,” recalled Gallagher. “Question: Where would we be today without it?” he asked the audience.

At its inception, the U.S. exported roughly 3 percent of its milk production as dairy products. That total runs close to 15 percent these days.

“Sixty percent of the milk powder we produce is exported,” said Vander Woude of CDI’s sales.

“We’re in a global market, and if we don’t compete globally, we’re going to hurt ourselves in the long run,” said Marilyn Hershey of the work done by USDEC. “As a dairy farmer, we know there is tremendous value in helping to get our product in other countries. You look at exports and the percentage moved, and that would have been extra milk in our market,” said the dairywoman who chairs DMI and farms in Pennsylvania.

While trade may be the future, the waters will not always be calm.

“Trade turbulence may be the new normal,” added Mulhern. “We will have to work harder than ever before.”

“We need to get China back,” added Randy Mooney, NMPF chairman.

“The Chinese government has told its people that they need to triple their consumption of dairy products. So, tripling $60 billion, you are close to $180 billion to $200 billion in the next few years,” he projected.

“We need to be there, and we are locked out,” said Mooney, referring to the trade war between the U.S. and China in which the Asian nation has blocked dairy product imports from the U.S.

“You talk about how we sustain (milk) prices?” Mooney asked the audience rhetorically. “We get back into some of these markets. That’s how you sustain it,” he said.

While the U.S. has been doing well in some markets, trade agreements also matter.

“The U.S. does not have a level playing field,” said Mike Durkin, president and CEO of Leprino, one of America’s largest cheese companies.

“Domino’s is the number one pizza player, and we are poised for even further growth,” said Ritch Allison, CEO of Domino’s Pizza. He explained that 25 percent of all U.S. cheese goes on pizza.

“Via cheese, we have grown our sales of milk by 1 billion pounds since we began our partnership in 2008,” Allison went on to say about Domino’s work with DMI. That sales growth accounts for the annual milk production from 43,000 U.S. dairy cows.

Pizza is a big category.

“In Asia, people eat pizza once every 30 to 40 days,” she said, bringing it back to exports. “The upside is significant,” she said of the Asia-Pacific region in which sales are growing despite trade woes with China.

“The immigration bill was introduced last week in the House,” said Mooney as he spoke positively about its potential passage.

“What I have found at National Milk, when all of us in the room get together, we can have success in getting legislation passed,” he said. “Immigration is not a large farm issue. It’s not a small farm issue,” he reminded the audience. “It’s a dairy farm issue.

“I had the worst year on my farm last year that I ever had . . . it wasn’t necessarily about economics. It was about labor,” continued Mooney. “I had a labor problem. Economics don’t make any difference if you don’t have anybody to do the work.

“We have an opportunity in this House bill to get it passed, and we are going to be sending out, through National Milk and the co-ops, information on who to contact, and how to contact, to get this done,” said Mooney. “So, I’m asking you, let’s put the weight of the U.S. dairy industry behind this immigration bill, and let’s see if we can get it through the House.”

Carbon credits could one day fuel your dairy
Features
Related to:
features, promotion, employees
In Features