When Minglewood Dairy added robotic milking to their farm, they quickly discovered that fewer interruptions made a big difference. 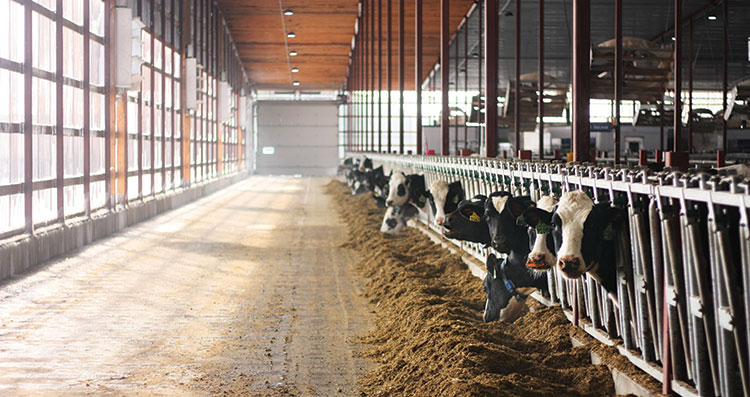 At minglewood dairy, all cows calve in their conventional barn. The cows with the best udder confirmation and teat placement are chosen for their robot barn.

Dairy producer Kevin Solum has farmed his whole life, but he’s learned a tremendous amount more about managing cows in the 18 months since eight automated milking systems were installed on his family’s farm.

Solum, a fourth generation dairyman from Deer Park, Wis., farms with his wife, Roxann, son, Ryan, and daughter and son-in-law, Kristin and Jacob Quist. Minglewood Dairy has grown steadily over the years to reach its current size of 1,200 milking Holsteins.

Five years ago, they were milking 700 cows in a double-9 parallel parlor and were looking to put in a rotary milking parlor. Their consultant encouraged them to rethink their project and install robots instead. After doing some research, they heeded that advice and installed eight robots in November 2018.

When the crew was installing the robots in their new barn, they told the Solums the cows would make the most milk on the weekends, when very few people are in the barn.

“They were absolutely right,” Solum said.

That meant the Solums had to adjust some of their protocols. For example, in their conventional barn, they bed cows on Tuesdays, and Wednesday is the day cows are dried up and moved in and out of the barn. They are also in by the cows three times per day, milking, scraping alleys, and raking stalls, and feed is pushed up with a skid steer every two hours.

“How do we manage a pen of cows without going in the pen?” he wondered. “It seemed every time we went in there, we were interrupting them.”

They quickly figured out a new schedule for that barn. They noticed that in the morning, after new feed is delivered, 90% of the cows get up to eat. So, half an hour after feed delivery, an employee goes through the robotic barn to rake stalls just once a day. They do veterinary work, bed stalls, and move cows all on one day. An automatic feed pusher keeps the ration in reach.

Solum said in their conventional facility, they prided themselves for high production, but they never had a cow milk 200 pounds per day. Since they started milking in their robot facility, they have had two of them.

“It’s incredible what they milk,” he said. “You don’t even know the cow’s out there. She’s just out there doing her thing, milking five times a day.”

Their herd averages 96 pounds of milk, with 4.4% fat and 3.35% protein. While the cows in the parlor are milked 3x, they are currently averaging 2.8 milkings per day in the robots, which is right where they want to be. Cows in the robot barn are averaging 5 to 7 pounds more than the parlor herd.

Their barn is a guided flow system, which they chose to maximize robot efficiency. When a cow comes up to milk, it has to walk through a smart gate that reads its ear tag. The cow either enters the robot to be milked or is sent straight out to the feed alley. Their access to the robot can be based on days in milk, timing (how long since the last milking), or production.

Milk quality has also benefited from the new system. In the robot barn, cows are averaging 50,000 to 70,000 somatic cells/mL a month. The conventional barn runs about 10,000 cells/mL higher. The automated system also detects mastitis using conductivity, and every morning, a list of cows to check on is generated.

Their pregnancy rate is higher in the new barn, and the cull rate has dropped 4.5 percentage points already, too. They attribute these positive changes to not only the robots but also the new barn they are housed in.

“There are a lot of creature comforts in this new barn,” he said. “Everything is just working better.”

Their new facility has positive pressure ventilation. Fresh air is brought in one end of the barn, and fans push the air down to the cows before additional fans pull the air out the other end of the building. Cows are cooled using only air movement — there are no sprinklers.

“We thought this positive pressure ventilation was the most efficient way of cooling a cow,” Solum said. “We’ve only been through one summer, but compared to our sidewall curtain barn with sprinklers, we didn’t lose even half a pound of feed intake, reproduction improved through the summer, and we didn’t lose any milk production in this new facility. In the other barn, we still did.”

Bedding is another important feature. They have been using sand bedding on their farm since 1993. “Sand is a wonderful thing. It is the standard of bedding for dairy cows,” he said.

The Solums have learned that the type of sand used makes a difference. “If you get sand with clay in it, you are probably going to run a little higher somatic cell count,” he said. “We switched to frac sand, which is very dry, and our count dropped about 40,000 cells/mL.” 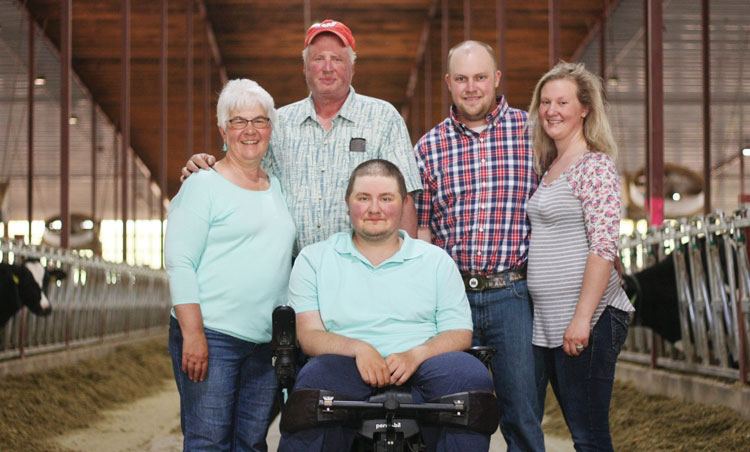 The benefits of automation

“The amount of information you can extract from this stuff is just incredible,” Solum said of the robot-generated data. “We aren’t even scratching the surface.”

One number Solum likes to look at is milk production for cows 100 days in milk or less. He follows their average production for the last two days and the last seven days, and he said this number typically runs between 117 and 122 pounds. If the two-day average is lower than the seven-day average, you know something is going on, he said. If your two-day is higher than the seven-day, you’re going in the right direction again.

The robots communicate by sending out an alarm for incidents. Solum bought a cellphone just for the robot barn, and the person on duty carries it with them.

Minimizing the number of alarms has a lot to do with maintenance, he explained. They have a repair kit for each robot. Solums’ son-in-law does the bulk of the repairs, and their night manager can also fix some problems. The dealer will also come out for scheduled maintenance and for issues when needed.

There has been a lot to learn, and managing a parlor-milked herd and a robotic one can be challenging. Even though running the robot barn is more different than Solum even expected, it’s safe to say they’ve successfully navigated the waters. In addition to improving health and productivity of the herd, they are able to milk 500 more cows while adding just one half of an employee position.

In the end, one of the biggest benefits of this addition has been creating an environment where cows can just be cows.

“This is all meant for cow comfort,” Solum said. “Cow comfort is absolutely what drives milk production.” The features in the newest barn at Minglewood Dairy give cows the tools they need to succeed.

Don’t let injuries get you down
By Abby Bauer, Senior Associate Editor