Do you want to give cows a day off? 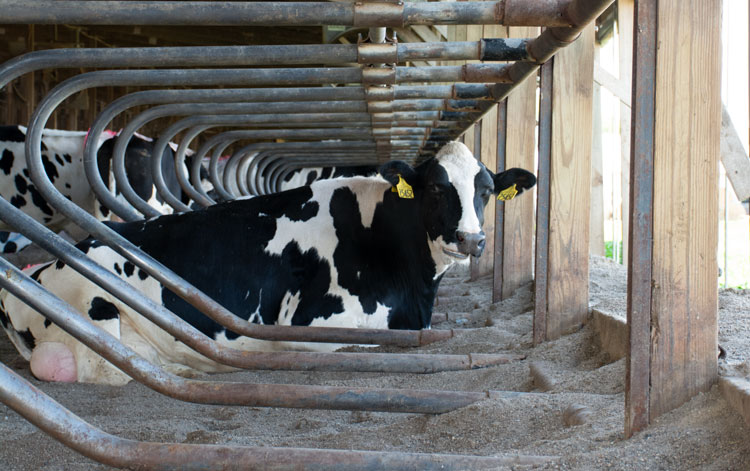 Roughly one day each week, every U.S. dairy cow’s milk production goes into making dairy products that will be exported to another country.

“Without exports, which day of the week do you want to give your cows off?” asked Cornell University’s Andy Novakovic on the May 13 episode of DairyLivestream sponsored by Lallemand.

That complicated topic of dairy exports was the focus of the discussion on this week’s broadcast. Special panelists for the episode were Tom Vilsack, current CEO of the U.S. Dairy Export Council (USDEC) and former USDA Secretary, and Butch Speth, Director of Dairy Market News. The recording of the webcast can be viewed now.

Gaining exposure
USDEC was first established in the interest of finding ways to move surplus dairy products. In the last 10 years, though, the group has worked toward developing deeper relationships with foreign customers to prove the U.S.’s commitment to the international market. “We want to send the message that we’re in it for the long haul,” stated Vilsack.

As a result, over the last five years, the percentage of U.S. milk exported as cheese has continued to grow, up to nearly 6% now. Approximately 70% of milk powder is exported from this country.

He continued, “USDEC has tried to increase our exposure in every market around the world.” Vilsack shed some light on their work to open those markets up to American dairy products.

Southeast Asia
The heaviest efforts are being focused on these countries, such as Singapore, the Philippines, and Vietnam. Why? In the next 10 to 15 years, there will be 10 times as many middle-class consumers in Asia than there are people in the U.S., Vilsack noted.

U.S. dairy protein is extremely desirable in that part of the world, so a strong presence is needed to take advantage of the demand. USDEC has partnered with many retail stores, like Costco, and culinary institutions in the region to educate consumers and aspiring chefs about the functionality and versatility of U.S. dairy, particularly cheese. The organization also recently established a Center for Dairy Excellence in Singapore, fully staffed to educate about and promote U.S. dairy products.

One of the best messages we have in promoting American dairy is our sustainability accomplishments, Vilsack said. “If we can convince the world that our milk is more sustainably produced, we will absolutely be able to sell our product.”

Northern Asia
China, the most populous country in the world, is also the world’s largest dairy product importer. However, COVID-19 shutdowns have created doubt about the country fulfilling their contracted purchases of U.S. agricultural products under the Phase One agreement. Vilsack is hopeful that the U.S. will continue to see growth and that “Phase One will continue to stand.”

The number one importer of cheese in the world might come as more of a surprise — Japan. Per capita consumption is 5.3 pounds each year. This provides a rich market for U.S. dairy, even when Japan has a surplus of milk powder like they do now. Schools and gyms, though many remain closed, are major consumers of U.S. dairy protein and hopefully remain so when business returns. Plus, the 2020 Olympic games have been postponed until 2021. That has greatly impacted sales in Japan.

North America
It’s likely no surprise that the U.S.’s largest dairy export customer is Mexico; they imported nearly $1.5 billion worth of American dairy in 2019. Vilsack did express concern, though, for the Mexican market as the peso falls in value.

The long-anticipated U.S.-Mexico-Canada Agreement (USMCA) will go into effect on July 1. Vilsack was at least positive that this will put the clock on removing Canada’s Class 7 restrictions, likely increasing Canadian opportunities for American dairy products.

An ongoing series of events
“The dairy farm finance pivot” will be the topic for the May 20 DairyLivestream. Special guests will include Sam Miller, managing director of agriculture banking at BMO Harris Bank. In this role, Miller works with farmers and agribusinesses on credit structure and financial analysis. Roger Murray will also join the discussion; he serves as the executive vice president of Farm Credit East.

As always, the panel of experts will discuss over 30 minutes of audience questions. If you haven’t joined a DairyLivestream broadcast yet, register here. Registering once registers you for all future broadcasts.