By Trevor DeVries, University of Guelph     Casey Havekes And   Sydney Moore
DeVries is a professor at the University of Guelph; Havekes and Moore worked with DeVries as graduate students. Havekes now serves as a Cornell dairy management specialist. 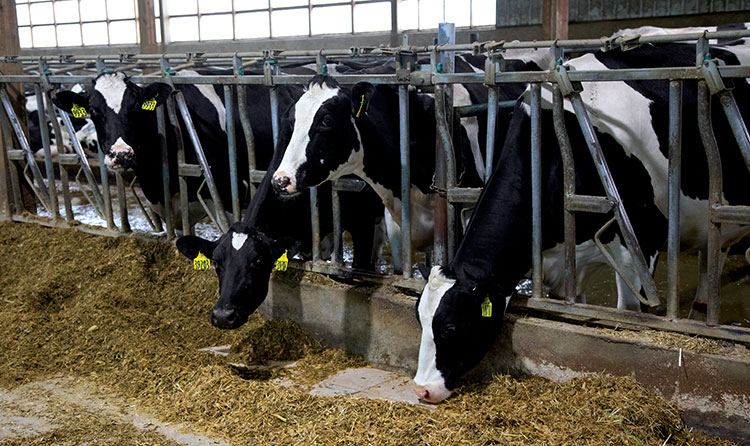 Molasses benefits cows when fed in both dry cow and early lactation diets.

What about dry cow diets?

Much of the research on molasses supplementation has been done with lactating cow diets. Given the ample benefits related to enhanced intakes, reduced sorting, and improved rumen health, could similar results be observed with dry cow diets, particularly those controlled energy ones that are high in straw content? These dry cow diets incorporate large amounts of low nutrient dense feedstuffs (typically wheat straw), in an attempt to reduce the energy density so that the cow can consume as much as she physically wants to, without running the risk of gaining excessive body condition.
From a behavioral standpoint, one of the major drawbacks of these diets is that cows tend to sort away from the straw and, subsequently, consume an unbalanced diet, particularly when the straw particle size is too long. From a nutritional standpoint, incorporating large amounts of straw could lengthen rumen retention time and limit intake — a consequence we would like to avoid given the positive effects of maximizing intake in the weeks leading up to calving. Because sugar supplementation aids fiber digesting bacteria, it may be more favorable to do so when cows are fed a high-forage, lesser fermentable diet.

To investigate these ideas, our research group at the University of Guelph conducted a study to determine if dry cows fed a high-straw diet would benefit from molasses-based liquid feed supplementation. Holstein cows were enrolled at dry off and randomly assigned to one of two dietary treatments: a high-straw dry cow diet (with straw chopped in a tub grinder with a 1-inch [2.54-cm] screen) with either: Cows were fed these diets for the entire dry period. After calving, all cows were fed the same lactating TMR (with no added molasses).
As hypothesized, the cows fed molasses had greater feed intake compared to the control group. The greatest difference in intake was recorded in the week leading up to calving, where cows fed molasses were able to maintain more consistent intake. This is an important finding, as in previous research it has been demonstrated that greater drops in intake as cows approach calving are associated with greater risk of experiencing metabolic disease postcalving.

We also observed that cows fed molasses consumed their feed faster and spent less time eating per meal. This finding is fitting given the molasses-fed cows sorted their diet less, indicating that they were directing their meal time more to eating, rather than picking through feed.
The dry cows fed the molasses also tended to have more frequent meals and a shorter time interval between meals, while not consuming any more feed within a meal, suggesting that the molasses positively impacted feed digestibility. This finding supports the idea that molasses may have an increasingly important role in diets where digestibility is compromised due to high inclusion rates of lesser quality forages.
Related