Feeding heifers doesn't always have to be a guessing game. 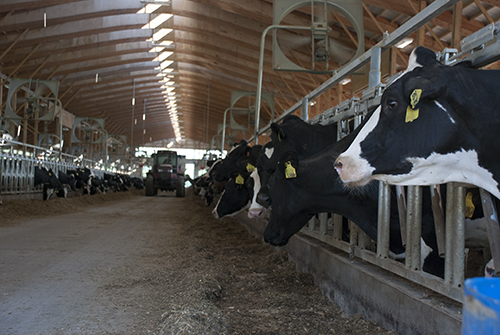 I remember my teenage years. As soon as I got home from school, I would raid the fridge and eat anything I could get my hands on . . . and I would still have room for supper.

A similar concept can be applied to feeding heifers. They're growing and can take in massive amounts of feed. However, that doesn't necessarily mean they should, which makes feeding them the correct rations that much more challenging.

In a recent webinar hosted by the Professional Dairy Producers of Wisconsin, Pat Hoffman of Vita Plus gave a presentation titled "Heifer Nutrition: Is the Diet Working?" Hoffman outlined several obstacles that dairy producers face when feeding heifers: In regards to overconditioning, Hoffman stated that heifers, for the most part, eat 1 percent of their body weight in neutral detergent fiber (NDF). He also noted that as heifers get older, their requirements for total digestible nutrients (TDN) actually shrink; however, many producers are feeding rations with too much TDN relative to the animal's weight, which contributes to overconditioning. Feeding more NDF to heifer rations can combat this, since daily gain is reduced as a result of accelerated gut fill.

Growth variance is also an issue, especially when factors such as pregnancy rates are taken into account. Hoffman said that herds with 25 to 50 percent pregnancy rates showed the greatest variance with growth rates, and that more services needed to get a heifer to settle caused even more delays.

Sorting feed also poses a problem. Hoffman mentioned that cattle don't like long particles in their feed. Heifers sort feed by pushing it with their noses, which can also cause foot problems; as they have to reach further and further from the bunk to reach feed that they pushed too far, they have to spread their legs further apart to extend their necks and reach the feed.

Hoffman also alluded to the impact that winter can have on growth rates, especially with the past two winters still fresh in people's minds. He recommended starting winter diets in late October and ending winter diets in late February. A heifer's resting surface can also make a difference; if it is comfortable and warm, less calories will be burned trying to maintain body temperature.

Giving young stock a good start leads to them reaching their full potential in the milking string. Environmental and physical conditions must be taken into account to ensure that each heifer is receiving the nutrients they need.

Dairy can be part of a New Year’s resolution
HD Notebook
Related to:
HDN, calves, winter, feeding
In HD Notebook