By Patti Hurtgen, Online Media Manager
For those competing at the highest level, dairy judging is serious business. Hours and years of practice and preparation go into the one contest on that one day. I wanted to learn a bit more about what went into the lighter side of preparing for their biggest dairy judging contest. Here are few of the entertaining stories I heard.
John Ayars, The Ohio State University
High Individual, 1963 Collegiate Dairy Judging Contest

"The reasons portion of the contest at Waterloo was held in a nearby hotel. By luck, I found an empty hotel room. I snuck into the room between each set of reasons, laid on the bed and gave my reasons to the ceiling." After questioning if this was a usual routine, he stated, "Nope, this was the only time and it resulted in winning the reasons portion of the contest!"

John and his wife Bonnie operate Land of Living Guernseys in Mechanicsburg, Ohio. 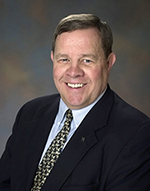 "I did not have a lucky charm, but I did have a major incentive. I was in college during the Vietnam War and had joined the Army Reserve. I had an Army Reserve weekend in Joliet, Ill., before the Madison contest and drove to Madison on Sunday evening. Being the last person to arrive, I had to sleep in the same room with our coach, Prof. J.G. Cash. I learned that Coach Cash snored loudly and irregularly (probably due to sleep apnea) and I did not get much uninterrupted sleep. At breakfast the morning of the contest, I suggested that the "low man" among the University of Illinois judges should have to sleep (or should I say attempt to sleep) in the room with Coach Cash the night after the contest. Needless to say, I did not have to sleep in the same room with Coach Cash after the Madison contest.

Bernie Heisner was the long-time General Manager of COBA/Select Sires. He was honored by National Dairy Shrine as the Guest of Honor in 2014. He is now retired and resides in Illinois.

Ted Halbach, University of Wisconsin-Madison
High Individual, 1980 Collegiate Dairy Judging Contest
"My father Eugene won the contest in 1939, and one of the awards he received was a pocket watch. I had that with me on contest day in 1980 and it clearly brought me good luck (and a little motivation)!

"The habits of the SDSU Jackrabbit 1989 judging team included always traveling with a bag of licorice. As a Guernsey girl, I became the team's "Guernsey Lucky Charm" as we usually did well with Guernsey classes. For me personally, I never judged in a contest or at a show without my Dairy Shrine pin. It was my personal lucky charm and something I still cherish today. "

Tina owns her own agricultural marking firm and enjoys watching the next generation of Four Winds show their Guernseys.

"I'm not too superstitious . . . However, I do remember asking my grandpa, who died nine years prior, for whatever help he could give me that day." Grandpa must have been giving Luke all he could, because Luke had the highest overall score ever, until 2010 when his record was topped.

Luke works for Semex and still takes an active interest in his family's home farm of Raylore Holsteins in Hutchinson, Minn.

"I didn't really have a lucky charm, but thinking about it, I wore the same tie tack for all of my big events. It was gold with an "H" on it. I wore it for judging and award interviews."

Matt farms with his family at Henkeseen Holstein in Luana, Iowa.

"My tradition was always to use the pen from the hotel night stand in my room. I also had all of the pens from each of the previous contest in my jacket pocket."

Rocco graduated from Modesto Junior College and transferred to Cornell University. Upon graduation, he moved to the southwest and works for Cargill. His R-John Holsteins are housed in Penngrove, Calif., and will be on the colored shavings this week. 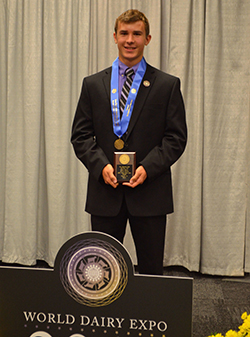 "I wore my Grandpa Merle's jacket during the judging practices just prior to Expo's contest. For the competition, I wore the same pair of shoes for all of my senior judging. They were really comfortable, which was helpful in a long day of judging. It was amazing how many types and colors of shavings they were on. I don't think there was anything too special about the shoes except they represented all the places judging had taken me."

I asked him the reason for wearing Merle's jacket. "Well, honestly, it was because I forgot a jacket and it was the only jacket in my grandma's van. Just a happy coincidence!" (His grandfather had passed away of cancer a few years prior and was a big supporter of his grandchildren's judging.)

Trent is a freshman at the University of Minnesota studying Animal Science. His family operates Four Hands Holsteins, a 450-cow Registered Holstein herd in northwest Wisconsin.

Each of the contestants would agree that winning the contest not only takes skill, but a little luck as well. Each national winner ignited their own luck that day!