Strength is in the eye of the beholder

The truth is that she fought for it. She hit a wall, an obstacle, and she crushed it. 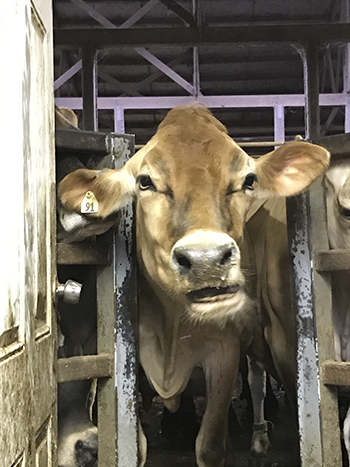 Roughly twice a year our cows get scored based on how they look, and last week was our turn. On the official scorecard, dairy strength accounts for 25 out of 100 points, but dairy farmers know that the true strength of a cow is worth so much more.

Last year, Vogue (pictured) had a set of unexpected twin bulls. Both were backwards and neither survived. Fifteen minutes later, my sister-in-law walked into the parlor and uttered the most dreaded two-word postcalving phrase: uterine prolapse.

Ugh. They’re not common but so horrible. Not just the act of correcting it, but the recovery is often long and arduous. Being an already late morning, we immediately called the vet. She was passing our farm on her way to work and was there in less than 20 minutes. Another 30 to 45 minutes after that, Vogue’s uterus was firmly back in its rightful place and the supportive therapy had begun.

In less than a week she was giving 25 pounds each milking and was ready to join the main milking string. Less than a week after that, she wasn’t just surviving as many prolapse cows are still trying to do, she was thriving. She never missed a meal, was one of the first cows in the parlor, and gave over 90 pounds a day. I could spend the rest of this post describing the hours of treatments and observation we provided to prove that we take good care of our cows, but honestly, I believe in placing credit where credit is due. The truth is that she fought for it. She hit a wall, an obstacle, and she crushed it.

Five years ago, my mother fought cancer and an unrelated brain tumor in less than six months. Last week, we found out that she is five years cancer free. She’s no body builder, and she may not look like the strongest person you’ve ever met, but she proves to me every day that you can’t judge a bodybuilder by his or her muscles, er, I mean a book by its cover.

Back to the basics
By Jessica Peters, Pennsylvania dairy farmer