Genetics, both in cows and crops, lay the foundation. 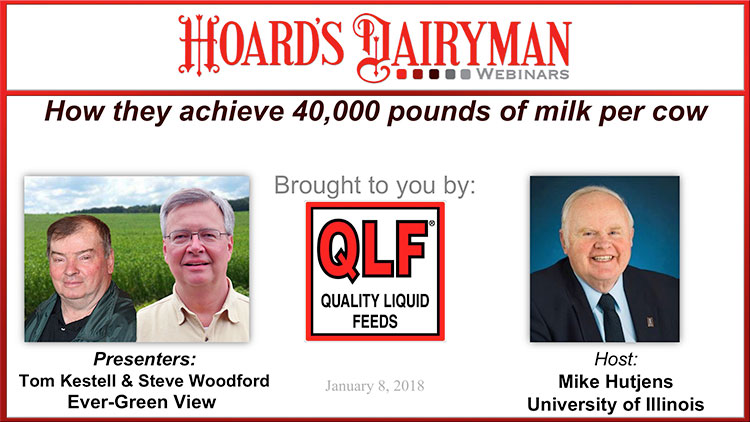 Webinar attendees were treated to a unique presentation and a Hoard’s Dairyman first on Monday, January 8, when a dairy producer served as presenter. Tom Kestell, owner of Ever-Green-View Dairy at Waldo, Wis., and his long-time nutritionist Steve Woodford shared their strategies with more than 200 live attendees.

The herd currently averages more than 44,000 pounds of milk per cow on 85 head. The Holsteins are milked three times a day in a tie stall barn. Herd size stays consistent as most cows leave the herd for dairy purposes, and they have a very low, involuntary cull rate of seven percent.

The 85 cows on the most recent test averaged 133 pounds per cow with 3.88 percent fat and 3.09 percent protein. With these numbers, the herd’s rolling herd average is 44,607F 1731F 1380P. Forty-two of the 85 milking cows are first-lactation cows that average 140 pounds each with third lactation and older cows averaging 180 pounds.

With the herd’s high genetics, there is significant demand for embryos from both these cows and heifers. Average age at first calving in the Ever-Green-View herd is 26.2 months. This is somewhat late by some standards, but is due to the delay in breeding because of multiple flushing opportunities on the young stock.

Tom is a firm believer in genetics as a basis of his top-producing herd. All animals on the farm are genomically tested. Their values for protein, fat, milk, and productive life are between three and six times the national average, with a 500-point GTPI advantage.

The farm has 600 crop acres and produces nearly all of the herd’s feed needs.

One unique aspect of their forage production philosophy is to high chop their BMR corn, leaving the lowest 36 inches in the field. The corn plant that was chopped using this modified method is a main ingredient in the milking cow ration. With this practice, they have seen a daily boost of two to three pounds of dry matter intake per cow, which has translated into even higher milk production.

Milk urea nitrogen (MUN) levels were 9.7, which is where Kestell and Woodford like it.

Ever-Green-View is proactive in heading off potential health issues. All fresh cows are given calcium boluses to ward off metabolic disorders. Third lactation cows and older each receive a bottle of calcium gluconate under the skin at calving. The hoof-trimmer is at the farm monthly. Calves are vaccinated at birth for rotavirus, coronavirus, and E coli. They also are fed pasteurized milk.

One of Tom’s closing comments, ”Feed cows for how they are bred.” And in his case, they are bred for top production and he feeds them to maximize their potential.

The entire presentation, including questions from attendees, can be found with this link. The webinar was sponsored by Quality Liquid Feeds (QLF). 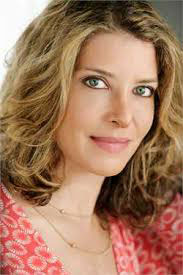 Join us for the webinar, “Animal fats: separating fact from fiction” on Monday, February 12, at noon (Central time).

Nina Teicholz, New York Times best-selling author of The Big Fat Surprise, explains the history of how saturated fats, including butter, came to be unfairly vilified based on weak science, and how the idea that these fats cause heart disease has been thoroughly debunked. She describes the politics of this science, past and present.