The team from Wisconsin claims the champion title at the National 4-H Dairy Cattle Judging Contest for the third year in a row. For the third consecutive year, Wisconsin came out on top at the National 4-H Dairy Cattle Judging Contest. The difference this year is that they won by a whopping 29 points. The team consisted of Marie Haase, Ben Styer, Abigail Powers, and Fritz Ullom and was coached by James Powers and Scott Nelson.

Not only did Wisconsin come out on top overall, they also claimed the titles for first-place team in placings only and oral reasons. Specifically, Marie Haase has reason to celebrate with her first-place individual wins in placings, oral reasons, and overall. Teammate Ben Styer placed fourth individually overall, fourth in reasons, and eighth in placings. Abigail Powers placed 19th overall, earning All-American honors, and was seventh in reasons. 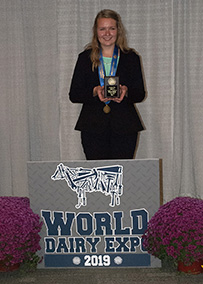 Twenty-five points separated Haase and Lane Bollenbacher, the second-place high individual, from Indiana. Haase also placed in the top 10 for three of the breeds including Brown Swiss, Holstein, and Jersey.

“I was completely awestruck at the results,” stated Haase. “Honestly, we didn’t place too well as a team toward the beginning of the contest with Ayrshires or Guernseys, but then we won the Jersey breed. That was the turning point.”

She continued, “By no means did I expect to win high individual. It was a complete surprise. I judge because it’s fun, and I enjoy improving my skills such as public speaking and critical thinking. The results of this contest have just added to my love of judging that much more,” said Haase.

Rounding out the team reasons behind Wisconsin included New York in second, Ohio in third, Kentucky in fourth, and Maryland in fifth.

Seventy-five individuals from 19 teams judged 10 classes and gave five sets of reasons during the contest. Congratulations to all 4-H members who competed in the 2019 contest!