One of the most important economic factors that determines a milking herd’s profitability is the average days in milk (DIM). That parameter obviously depends on getting the cow pregnant early in lactation.

In the same vein, a valuable resource on every dairy is its replacement heifer population. Just as with days in milk for cows, reproductive efficiency in the heifer is crucial to financial success. Taking advantage of this valuable resource requires good management. On some dairy farms, heifers are not inseminated as soon as they have reached adequate age, stature, and body weight. That’s a poor financial decision, as it’s estimated that 15 to 20 percent of the total costs on the dairy farm are associated with heifer rearing. The largest cost of raising heifers is days on feed before first calving.

Where is the industry now in its progress toward improving the efficiency of heifer breeding? More importantly, what is the age of your replacements at first calving?

Whether you manage your own replacements or have them reared by someone else, you should monitor this important economic trait.

The average ages of heifers at first calving by dairy breed are summarized in Table 1. These data were compiled from DHIA (Dairy Herd Information Association) herds across the U.S. whose records were processed by the DRMS (Dairy Records Management Systems) in Raleigh, N.C. The data were edited to remove herds in which age at first calving was obviously not recorded accurately (such as herds with averages less than 20 months and older than 30 months).

Age at first calving for six of the dairy breeds in 2016 and those of mixed-breed herds ranged from 24.8 to 26.8 months. Compared with similar data from 2011, age at first calving has been reduced by 1.5 to 1.8 percent during that five-year period, except for Jersey and Guernsey herds.

Various traits of first-lactation Holstein cows grouped according to their age at first calving are summarized in Table 2. Note that for every trait summarized, younger calving heifers led the way!

Can we say that because heifers were calved at younger ages that the traits summarized in Table 2 were improved?

Although this may not be a cause and effect relationship, it is clear that these traits are highly correlated to other important management decisions made in those herds having heifers calving at younger ages.

When lifetime yields were expressed as milk per day of herd life, heifers calving at younger ages excelled. Dairy heifers are an asset whose value cannot be tapped until they freshen and begin to produce a saleable product — milk.

Investment costs made in your A.I. program are recovered more quickly when heifers are inseminated artificially. They represent the most fertile group of females in which the very best genetics should be invested, including use of sexed semen if you desire to grow your herd from within or sell extra heifers.

Heifers can mature at younger ages and grow faster. Anything that can be done to raise the amount of protein and energy consumed by the milk-fed calf will result in a higher growth rate and a significant improvement in the health and productivity of that calf.

Sufficient data exist to substantiate the fact that heifers raised on a higher plane of nutrition produce much more milk when compared with heifers raised on more traditional programs. Accelerated feeding strategies pay dividends. By feeding our baby calves three times daily, we have observed improved growth in both weight and stature. View a dairy heifer replacement program as a potential profit source and never as a cost with no return.

To maximize lactation performance and reduce rearing costs, a general recommendation is that average age at first calving in Holsteins be less than or equal to 24 months with body weights greater than 1,230 pounds after calving at 24 months. A retrospective study of age at first calving of Holstein dairy heifers was conducted in three California commercial dairy herds (J. Dairy Sci. 87:2730; 2004).

Heifers (n = 1,905) were moved to breeding pens between 12 and 13 months of age and grouped retrospectively according to age at first calving as low (less than or equal to 23 months), medium (23 to 24.5 months), and high (more than or equal to 24.5 months). Although not preassigned to age groups before start of breeding, Holstein heifers managed as in this study had the greatest economic returns (between $99 and $138 per heifer) when calving between 23 and 24.5 months of age.

In summary, reducing average age at first calving by 2 to 3 months can boost profitability of the dairy operation by shrinking the inventory of heifers needed to maintain herd size, providing more heifers for herd expansion or increased voluntary culling, or having extra heifers to sell. Extending age to first calving is extremely costly to your bottom line. Happy A.I. heifer breeding! 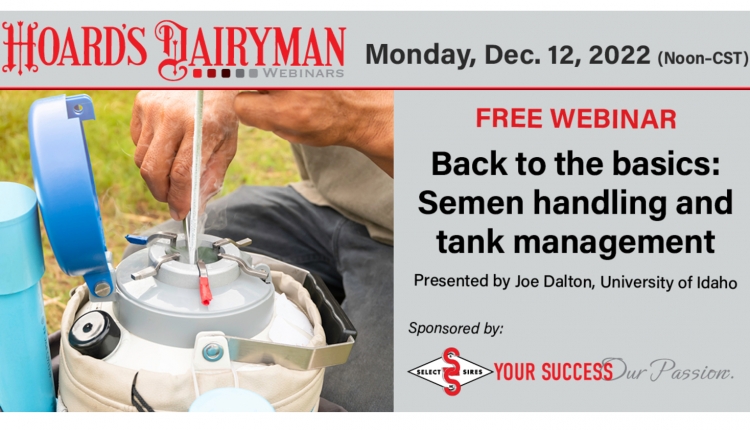 Back to the basics: Semen handling and tank management
2022 Webinar Archives 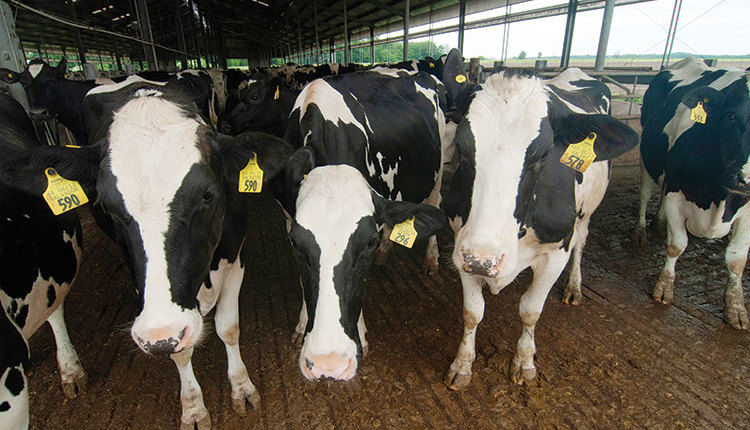