Is it time to make NAFTA great again?

Newton is director of market intelligence and McCullock is an economist, both with American Farm Bureau Federation.

The North American Free Trade Agreement (NAFTA) just celebrated its 23rd birthday. NAFTA is a three-country trade accord negotiated between the North American countries that include Canada, Mexico, and the United States.

The importance of NAFTA to U.S. agricultural producers cannot be overstated. When all totaled, the U.S. exported nearly $135 billion in agricultural commodities in 2016 . . . and nearly one-third of these shipments went to NAFTA countries. Since NAFTA’s inception, agricultural exports to Canada and Mexico have totaled approximately $550 billion and grew by more than 300 percent from pre-NAFTA levels. The primary commodities exported include feed grains, livestock and meats, oilseeds, and dairy products. Simply stated: NAFTA has been good for U.S. farmers and ranchers.

In early February, President Trump indicated he would follow procedures in Trade Promotion Authority and soon start the clock on renovating NAFTA. The White House is required to provide a 90-day notice to Congress before it can launch trade negotiations. Considering these recent gestures by the White House the question now being posed in agriculture policy circles is: “Can NAFTA be improved?”

Certainly there are areas where NAFTA can be improved. The major negotiating themes will be driven by rules of origin for manufacturing and border security issues. However, agricultural related issues that frankly weren’t on our radar screen a quarter century ago could be revisited in a “new” NAFTA. These nontariff issues include biotechnology, digital commerce and services, sanitary and phytosanitary measures, and geographic indicators.

While there are a lot of complaints about dairy under the current NAFTA, the numbers may make one think again. In recent years, dairy exports to Canada and Mexico averaged nearly $2 billion per year and represent 40 percent of all dairy exports. For comparison, in 2016 only 8 percent and 2 percent of U.S. dairy exports flowed to China and the EU-28, respectively.

Since NAFTA’s adoption, U.S. dairy farmers have exported more than $21 billion in dairy products to Canada and Mexico. During this time period the net trade balance (exports minus imports) in dairy products with NAFTA members stands at $12 billion. It is on the back of NAFTA that the U.S. now exports nearly 15 percent of its annual milk production. Dairy industry economists will point out that the value of milk in the U.S. reached a record high in 2014 due to these export opportunities.

A new NAFTA could be even better for dairy. For example, under the proposed Trans-Pacific Partnership (TPP) that has since been scuttled, Mexico and Canada would have provided new market access for fluid milk, cheese, butter, powder, and other dairy products. These gains would occur on top of market access already available and would have provided a boost to dairy farm revenue. In addition to new market access, Canada’s recent national ingredients strategy designed to put U.S. exporters at a competitive disadvantage to Canadian processors could be addressed in a “new” NAFTA with stronger dispute settlement mechanisms.

New trading opportunities are critically important to the U.S. dairy farmer’s milk check. With one day’s worth of production each week going to the export markets, dairy exports represent a large share of the $36 billion farm gate value of milk.

The new home for dairy

Exports will soon play a larger role. USDA recently projected U.S. milk production would grow by 20 percent over the next decade to 260 billion pounds. That’s 50 billion additional pounds of milk that will need to be absorbed in the domestic and export channels. USDA forecasts an additional 16 billion pounds of use in the export market.

To reach this target, U.S. dairy exports need to grow by 42 percent and outpace the growth in both domestic consumption and U.S. milk production. Forgetting for a moment the strength of the dollar or world dairy product prices, substantially growing exports will be a tall task without new trade opportunities (or a supply hiccup somewhere in the world).

Opponents of trade will paint with a broad brush and point to the trade balance across all of agriculture as evidence that NAFTA has failed U.S. farmers and ranchers. However, Adam Smith, the father of economic principles, taught us that to grow exports we must also grow imports and that competitive advantages in labor or resources would determine trade flows. For example, in NAFTA, U.S. grain, oilseed, and dairy products expanded into NAFTA markets while Mexico’s horticultural and specialty crop products benefitted from greater access to U.S. markets.

As a whole, the agreement has had a positive impact on U.S. agriculture with a net agricultural trade balance since implementation of $6 billion. It would be larger, but the U.S. imports a variety of high-valued fruits and vegetables that can be grown and supplied fresh to U.S. consumers year-round. Perhaps U.S. farmers could grow these products if we pulled out of NAFTA, but is the U.S. consumer willing to pay more and accept seasonal availability?

We could rearrange some of the deck chairs in agriculture, but then we run into another regulatory hurdle: Who is going to help us harvest these crops and milk these cows? Our neighbors to the South are critically important in that arena, too.

Hoard's Dairyman Intel
Where is Farm Bureau on supply management?

Milk Check Outlook
Should we take federal orders back to the basics? 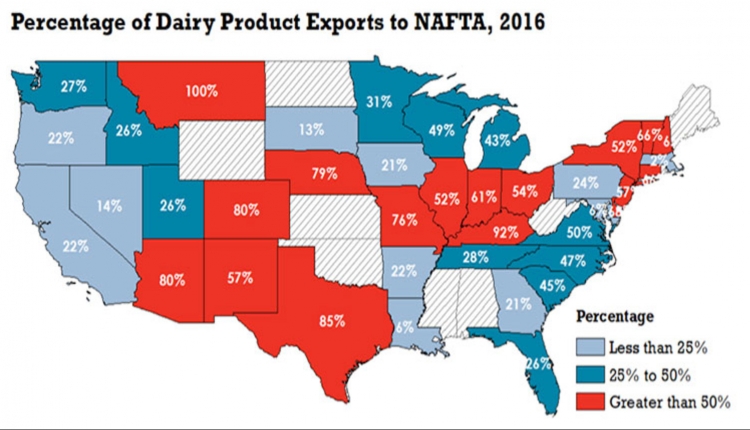