Digestibility of fats plays a significant role in determining a cow’s ability to capitalize on fat’s energy content.

By Jackie Boerman
The author is a dairy extension specialist at Purdue University. 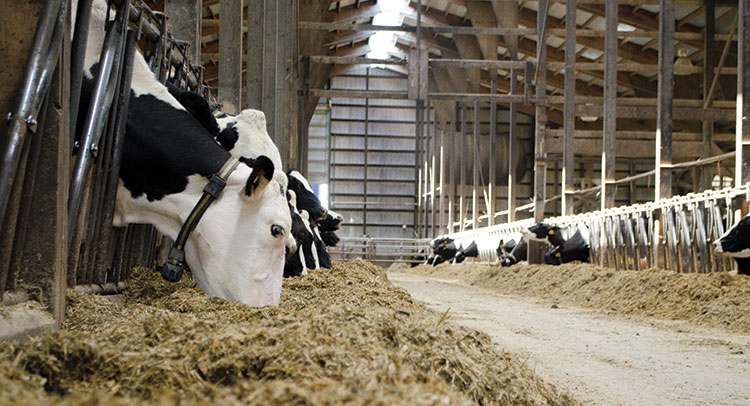 Fats are added to diets to raise energy density. During hot weather, they may be included in rations as a way to combat heat stress. The reasoning behind fat supplementation is that its higher energy density can help offset reduced feed intake that occurs during heat stress.

Anyone who has fed cows knows that when the temperature heats up, there are more refusals. If cows are eating less feed, they are getting less energy. Improving the energy density of the diet may help maintain energy intake even when the cow is eating less. Even when its not hot outside, there can be situations when the high energy density of fats can be beneficial.

Fat contains more energy than protein or carbohydrates, but the amount of energy that the cow receives from fat is variable. In part, this is because the digestibility differs between fatty acids.

Even when a cow is not fed fat supplements, it is consuming fat from forages, grains, by-products, and oilseeds. Most of the time, fat percent is limited to less than 5 to 7 percent of the total diet. While this is a small portion, fats may account for more than 10 percent of the dietary energy content. This is because it can contain up to 2.25 times the energy of protein or carbohydrates. There is no other nutrient fed to cows that is as energy dense as fat, as long as that fat is digested.

In order for a nutrient like starch to be comparable in energy density to fat, the fat would need to be less than 40 percent digestible. Most fatty acids will have a digestibility value well above 40 percent, and will therefore still provide more energy than a very digestible carbohydrate like starch.

Fat supplements, large grain particles, or intact oilseeds may offer protection for some of the unsaturated fatty acids. Anything that slows down the exposure of fat to the rumen microbes will improve the likelihood of the fat passing through the rumen without being converted to a saturated fatty acid.

There may be an opportunity to feed some rumen-protected oleic acid in order to enhance the digestibility of the large amounts of stearic acid that already reaches the small intestine. A number of researchers are exploring this area to see if there are options to elevate the energy value of fat by increasing digestibility.

Because of research at universities, companies, and commercial farms, we have a greater understanding of individual fatty acid digestibility and how various fat supplements may work in different ways in the cow. Not all fatty acids will give the same response for milk, milkfat, or other measured attributes.

Dairy farmers may have seen this themselves as they experiment with various fat supplements and notice differences in milkfat, body condition, or milk yield. However, there is still the assumption in most nutritional modeling software that fat digestibility is constant across all levels of fat supplementation and that fat digestibility is similar between fatty acid types.

In order to better model what the cows are telling us when we feed diets with different fatty acid profiles, we need to account for changes in digestibility for individual fatty acids. These changes will mean changes in energy availability for the cow.

Don’t allow variation to become a cliché
By Jackie Boerman