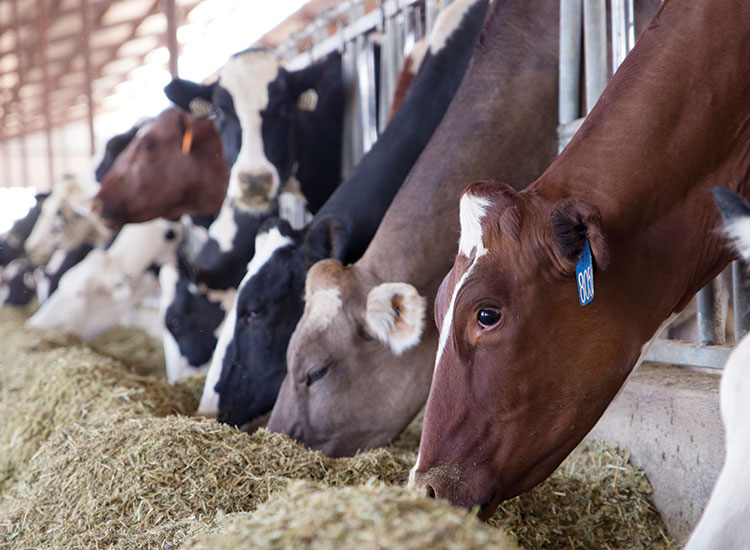 Overstocking limits eating and resting space, which can then negatively impact rumination time.
Health and milk production are optimized by ensuring dairy cows maintain sufficient nutrient intake to meet their requirements. To do this, formulation and provision of high-quality diets to meet those requirements are needed.

Unfortunately, cows do not always get the maximum value from their feed. Cows may not consume enough of the feed or capture all of the available nutrients from that feed through processes of ingestion and digestion. These issues may be directly related to behavior — in particular, how dairy cows eat and ruminate their feed.

There’s only so much time

The manner in which a cow consumes its feed directly relates to how much it eats, as well as how that feed is digested. The amount of feed a dairy cow eats is a function of its eating behavior; that is, the total intake of a cow is the sum result of the number of meals consumed daily and the size of those meals.

Similarly, feed intake is a function of the total time a cow spends eating per day multiplied by the rate at which the animal consumes that feed. Therefore, for a cow to consume more feed, it needs to adjust some aspect of its eating behavior. In our research at the University of Guelph we have demonstrated that in high-producing cows, greater feed intake and greater milk production are more consistently associated with cows spending more time at the bunk consuming more frequent, smaller meals.

This type of eating pattern is also beneficial for rumen health and efficiency. Maximizing time spent feeding at the bunk and consuming smaller meals are also important for keeping the rumen stable. This translates into improved fiber digestibility and higher milkfat content.

The ability of cows to devote sufficient time to ruminating their feed should also not be overlooked. When cows ruminate, feed particles are broken down into smaller pieces; this not only allows rumen microbes to better digest that feed, but it also helps move the material from the rumen once digested.

The faster digested feed is removed from the rumen, the more feed the cow can consume. Thus, allowing cows sufficient time to ruminate contributes to their ability to maximize feed intake.

Further, when chewing cows produce a lot of saliva, which contains bicarbonate. Bicarbonate helps reduce the acidity levels in the rumen. Therefore, promotion of chewing through rumination further contributes to a more stable rumen environment.

We must ask ourselves, then, how do we ensure cows are not limited in their eating and rumination time? It starts with a well-balanced diet formulated to meet their production requirements. This includes adequate effective fiber to promote slower consumption and greater rumination times. Beyond that, we also need to be sure that cows are able and stimulated to access their feed throughout the day, as well as have sufficient time and desire to ruminate.

It may sound simple, but the first and foremost thing we need to do to promote good eating behavior is to maintain feed availability at all times of the day. An empty feedbunk, for any extended period of time, is not only going to potentially limit intake but will also cause cows to change their intake pattern. Any extended period of time without feed access is typically followed by cows consuming too large of a meal, which is not good for rumen digestion.

The next thing we need to do is stimulate cows to access the bunk often throughout the day. This is going to be driven, in part, by hunger — which is going to be largely related to feed quality. The faster cows can digest their feed (as a result of greater feed digestibility), the sooner they will return to eat.

We also know that events, including milking and feed delivery, will stimulate eating activity. Of those, we have demonstrated in a series of studies that delivery of new feed is the most consistent and effective way to encourage feeding activity. Delivering feed more than once per day has been demonstrated, in both controlled and field experimental conditions, to promote those favorable eating patterns described above. The result is improved digestion efficiency and greater milkfat content.

In between feed deliveries, it is also critical to push up feed frequently. This will ensure that cows, no matter when or why they are at the bunk, always have access to the feed that is there for them.

From a practical perspective, push up needs to be performed often enough so that cows do not react to that event. If most of the cows come rushing to the bunk once the feed is pushed up, it means that cows have gone too long without feed available to them and need their feed pushed up more frequently.

It is noteworthy that in our research we have also associated greater lying duration with greater frequency of feed push ups. This suggests that frequent push up minimizes any wasted time cows spend standing around not being productive (either eating, drinking, lying, or being milked).

Room to eat and rest

Feed access may also be influenced by pen stocking density in group-housing situations. When we overcrowd pens, so that not all cows can eat at one time due to insufficient bunk space, cows will change their consumption patterns. They will consume larger, faster meals, or alter their patterns of intake by forgoing eating opportunities at the time of the day when they are usually motivated to eat.

Thus, our goal should be to provide enough bunk space so all cows can feed comfortably at the same time. This is particularly important during the close-up and fresh periods. Lack of sufficient feeding space will not only change eating patterns but can also elevate the likelihood of cows not consuming sufficient feed, and thus raising the risk of postpartum metabolic and infectious disorders.

Time spent ruminating is largely dictated by the composition and amount of diet consumed. However, that time may also be related to other factors that influence the daily behavioral patterns of cows. The longest daily bouts of rumination occur when the animal is at rest (lying down). The lion’s share of rumination typically occurs while cows rest at night, with other major bouts occurring during the middle of the day while resting between periods of milking, feeding, and drinking activity.

It should not surprise us, then, that any disruption to a cow’s normal rest time may limit its ability to spend enough time ruminating; this may lead to reduced feed intake and production. Maximizing rest time is a key component to optimizing rumination.

To ensure enough resting time, stalls must be sufficiently sized to allow cows to lay down and stand up without hindrance. Stalls also need a comfortable lying surface (such as deep bedding or sufficient bedding on top of mattresses). Minimizing heat stress and limiting social stressors in group-housing situations (including overcrowding and frequent regrouping of cows) are important to allow cows to devote sufficient time to rumination.

Overall, our research indicates that feed consumption, digestion efficiency, and production are optimized when cows are able to maximize their time spent eating and ruminating. As described, we can encourage these behaviors through proper nutritional management and housing.

Interest rates and inflation deserve your attention
By Trevor DeVries, University of Guelph