More eyes on the cows

“We are hungry for more data,” said Steve Maddox Jr. At Maddox Dairy, they use an artificial intelligence computer vision system to more closely manage feed delivery on their farm.
When the Maddox family expanded their dairy herd to 3,200 cows in the late 1970s, there weren’t many farms of that size in California or across the country. Although they had more animals to manage, Steve Maddox Jr. said their philosophy, which was established by his grandfather Doug, has always been to treat each cow as if they had just one.

“What makes us really unique is that we come from a registered cattle background,” said Maddox, who manages the farm’s crops and show herd. “We are very much cow men in the sense that we still walk the pens every day, just as if we had a tie stall barn. We look at those cows the same way.”

Today the Riverdale, Calif., farm is owned by Maddox’s father, Steve Maddox Sr., and to help maintain this careful attention to detail for each cow, they have experimented with different herd management systems.

“Technology-wise, we have been progressive, but we’ve also been very careful,” Maddox shared. They tried several wearable technologies to track activity, but he said they didn’t provide the accuracy they desired.

Then, four years ago, they had a meeting with a new Irish company named Cainthus to learn about their artificial intelligence computer vision system, which uses cameras to collect data that is then run through algorithms to recognize certain aspects of the dairy. Soon after, they installed the system and have been using it ever since.

The cameras are located every 100 feet, with four cameras in each of their eight freestall barns. Data is constantly being collected and is available at all times.

The herdsman for Maddox Dairy, Juan Garcia, analyzes the data most often, and it is one of the first tasks he does each morning.

Unlike some tracking systems, these cameras are not collecting data on individual cows; instead, they are monitoring groups of cows and certain areas of the barn. The most useful data for Maddox Dairy so far has come from the feedbunk. 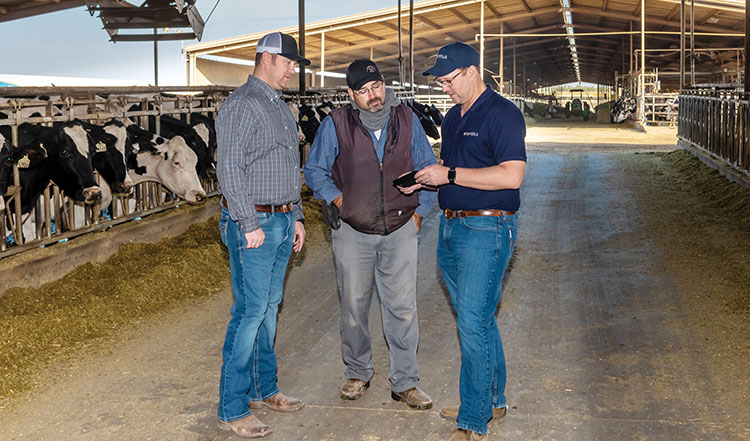 Each morning, prior to feeding, the bunks are cleaned with a loader and the leftover feed is weighed. Garcia said this number is documented on a per pen basis.

Their goal had been to deliver feed within 30 minutes of clean out, but they wanted to tighten that number up, explained Garcia, and that is where Cainthus and the ALUS Nutrition system came to play. The data collected by the cameras show Garcia how much feed is left in each bunk, and how long each bunk has been flagged as having “low feed.”

“We use it to see which pen needs attention right away,” Garcia explained. The pens with the highest low feed time have feed delivered right away. The ability to target which pens need feed the most has shrunk their time between clean out and feed delivery to just 15 minutes.

They compare the documented weigh backs per pen to double check that the low feed times correlate. “We want to make sure when we are adding feed to a pen, it truly needs it,” he said. “Typically, it is 90% to 95% accurate.”

An opportunity to teach

The cameras also uncovered a problem they were having with feeder error. Maddox explained they train feeders to disperse the ration evenly along the bunk, but that doesn’t mean it always happens that way.

“If 75% of the feed is on one end of a pen, cows are going to devour feed on the end with the least amount,” Garcia explained. “The cameras detect it as a low feed area, but technically it is not — it is feeder error.” They have used this data to show feeders the importance of spreading the feed out evenly and adding extra feed in low spots during their fourth and final feeding of the day.

The data has shown that in some pens, cows love to eat in one spot of the feedbunk more than others. As a result, feeders now drop a little more feed where cows like to eat. They are also able to make sure clean outs, feed deliveries, and push-ups are taking place as often as they should be.

“It helps us retrain feeders,” Garcia said. “We can focus on tightening things up and ensure feed is in front of the cows.”

“What we love is technology that takes us back to the basics,” Maddox said. He compared the information they now have at their fingertips to the feed audits they used to do once or twice a year, except that this evaluation can be done every single day, at any time of the day.

“Managing feed is very basic, but it is huge on the return side. Wasting feed, that’s a big cost to us,” he explained. “We know the more feed you have in front of the cows, the greater their dry matter intake, and as a result, they will make more milk.”

In the past few months, they have been using the behavior tracking technology, ALUS Behavior, from Cainthus as well. With the same cameras, the program monitors the area behind the feedbunks, including the alleyways and the stalls. It recognizes when cows are lying down and also tracks how long cows are out of the pen. Again, this is done at a pen-level basis.

While Maddox said they are more focused on the nutrition side right now, they recognize the value of monitoring other behaviors.

Garcia agreed, and said, “It helps with overall cow comfort. It detects how long it takes cows to return from the parlor.” He shared one example of a positive change they were already able to make due to data they acquired from out of pen time.

“Early on, we detected that one parlor was taking a really long time to milk the last pen of the day,” Garcia said. They found that the milking was getting done early, so the milkers were slowing down the last group of cows to extend it into a full shift.

“Who was getting the short end of the stick?” Garcia asked. “The cows, obviously.” Using this information, they explained the importance of returning the last group of cows to their pen as soon as possible and asked milkers to use the remaining time to clean the parlor instead. “Access to this information can be a big training tool for different departments on the dairy,” he added.

A change in the schedule

The herd had been milked 3x for 35 years, but in 2019 they made the switch to twice a day milking as result of California’s overtime restrictions. Maddox said they saw both pros and cons with this change.

“We noticed that cows bounced back a little better from challenges (like mastitis) when we were milking 3x,” Maddox said. “On the other side, there’s a lot going on with 3x milking, and it stretched our labor.”

One positive is that milk production was impacted very little. “We analyzed production year after year, and we are basically just a hair under what we were at 3x. Components wise, we are quite a bit higher,” Garcia explained. The herd of Holsteins averages about 80 pounds per cow, 85 pounds per cow of energy-corrected milk (ECM).

The behavior tracking data shows them what cows are doing with their extra time. “Cows have more time to rest,” Garcia said. “That is something we can track now. Time standing in holding pens is reduced. Time walking to and from parlor is reduced.”

At Maddox Dairy, they are eager for opportunities to more closely monitor their cows.

“As managers of a large dairy, you have to find ways to see things when you are not here,” Maddox said. “Now we can see exactly what is being done and when, which is really beneficial.”

“Cows love consistency,” Garcia added. “This helps manage consistency as far as feed delivery, push-ups, and feed in the bunk.” In the end, more eyes on the cows — human or cameras — allow them to provide a more consistent routine for the cows. 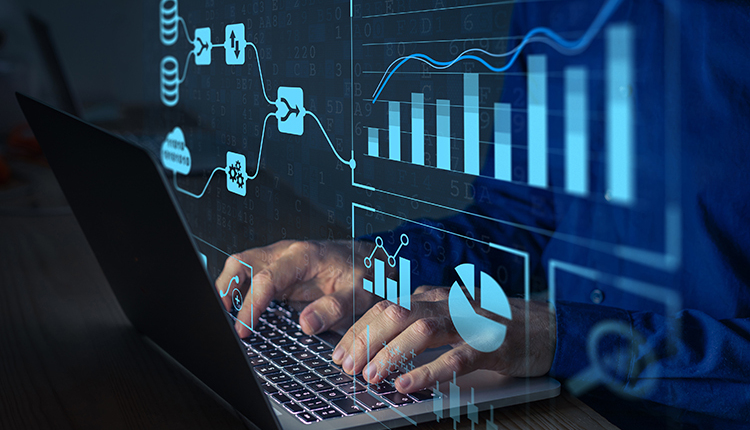 Where could dairy technology lead next?
Hoard's Dairyman Intel - Thursday

What can we do about inbreeding?
Reproduction E-Source
Related to:
features, technology
In Features

Hoard's Dairyman Intel
Can the farm afford another partner?
comments powered by Disqus