Do hybrids differ that much in starch type?

There has been an explosion of interest among seed corn buyers about the differences in the type of starch found in hybrids. What these discussions are referring to is the amount of floury (also called soft or dent) endosperm versus vitreous (also called hard or flinty) endosperm.

Floury endosperm contains the white-colored starch granules found in the center of the kernel as shown in Figure 1. They are more loosely bound in a starch:zein protein (prolamin) matrix. Dent corn derives its name because this softer starch "dents in" at the top of the kernel as it matures.

Hybrids with more floury starch generally have lower test weight due to kernel reduced density (more air space between starch granules). However, only about 40 percent of the variation in grain density can be attributed to test weight. The remainder is due to the influences of kernel size, shape, maturity, germ content, and pericarp slickness.

The relationship between kernel density and vitreous starch levels at dry grain maturity, when the kernel has the highest level of hard starch, is illustrated in Figure 2. Note the shaded area indicating the typical range of vitreous starch in commercial hybrids. Research comparing the starch digestibility of floury genetics against flinty hybrids has certainly furthered the understanding of the mechanisms of starch digestion. However, caution is needed when extrapolating these "bookend" comparisons to what dairymen will observe from high-yielding, commercially available hybrids. 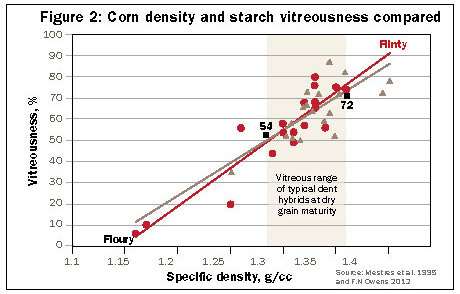 Research comparing starch digestibility of hybrids with less than 50 percent
vitreousness can aid in the understanding of digestion mechanisms
but have little appli-cability to high-yielding commercially available corn hybrids.

Microbial activity during fermentation and the chemical action of various fermentation end-products (acids, yeast-generated alcohol) alter kernel storage proteins, removing most of the negative effects of zeins (prolamins) on starch digestibility. There is a strong positive relationship between the level of soluble protein (or ammonia nitrogen) in corn grain and the improved ruminal starch digestibility of corn grain over time in fermented storage.

If corn kernels are fed fully mature and not fermented, as in the case of dry corn grain, research from France indicates that fine-grinding can remove the negative impact of vitreous endosperm on starch digestibility. This is something nutritionists have learned simply by watching cows (and manure) and is the reason for feeding fine-ground dry corn (600 to 1,000 microns) rather than rolled or cracked corn to high-producing cows. Steers can successfully be fed coarser grain because they have less fiber in their diet and a much slower ruminal starch passage rate than lactating cows.

For corn fed as dry, ground, or rolled grain, starch from finely ground, more floury, endosperm hybrids will generally be more extensively degraded in the rumen compared to starch from more vitreous hybrids. However, with acidosis as a common nutritional malady, is boosting ruminal starch digestibility always the goal?

High ruminally available starch may or may not be of benefit depending upon other starchy ingredients like corn silage, the relative need for ruminal microbial protein production, and the possible desire to shift starch digestion to the intestines to reduce the potential for acidosis.

For corn fed as fermented corn silage or high-moisture corn, more vitreous hybrids with large kernels (reduced pericarp:endosperm ratio) appear preferable. This is because they typically have higher grain yields, and the process of fermentation (protein matrix solubilization and acid hydrolysis) will minimize most of the adverse effects of vitreousness.

Not a benefit
It appears counterproductive to recommend hybrid selection for low test weight or kernel vitreousness given these facts:
1. Seed companies do not have data on the level of vitreousness at silage or high-moisture grain harvest maturity.
2. Vitreousness of grain harvested at silage maturity is considerably lower than for dry grain.
3. Adverse effects of vitreousness for dry grain can be largely alleviated by fine grinding.
4. Fermentation significantly re-duces the impact of vitreousness.
5. Selecting hybrids for reduced vitreousness likely depresses grain yields and possibly causes more ear molds.

Rather, it seems prudent to select corn hybrids for traits for which there are significant genetic differences such as silage tonnage, grain yield, and trait packages necessary to protect yield against specific pest and weed challenges. Growers can then fine-tune the selection process with attention to resistance to drought, foliar disease, and ear molds. 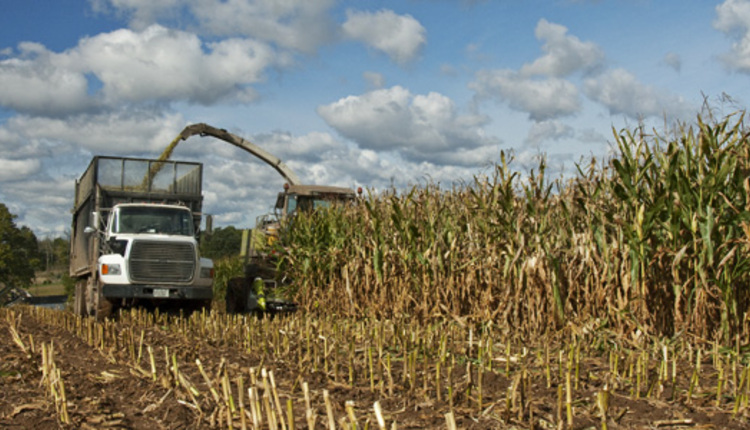