Your TMR: Too wet or too dry? 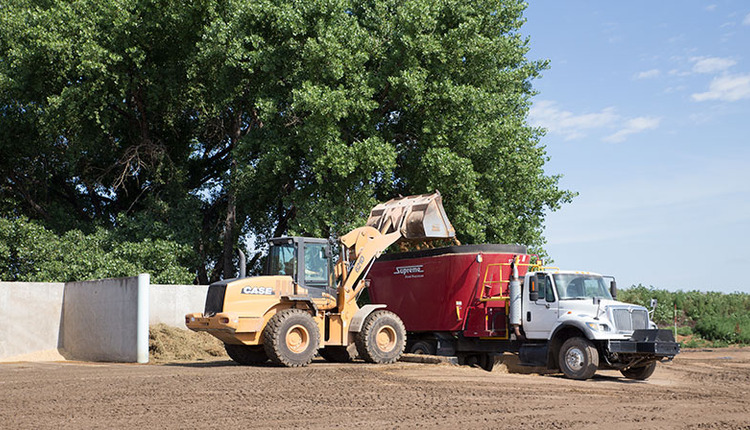 The author is associate professor, University of Guelph, Kemptville.

Total mixed rations (TMRs) have become widely recognized as the optimal way to provide a consistent balance of nutrients. Despite our best efforts in formulating and delivering the ration to cows, though, we know that what each cow consumes is not always the same as what we initially delivered. Cows have been shown to prefer or sort for smaller grain particles while discriminating against the longer forage components of their TMR.

Sorting can result in the consumed ration being higher in fermentable carbohydrates than intended and lower in effective fiber, thereby elevating the risk of subacute ruminal acidosis.

In two recent studies we have observed that TMR sorting is associated with reduced milkfat percentages. Milkfat was found to fall by 0.15 percent for every 10 percent refusal of long forage particles in the ration.

Further, sorting of a TMR reduces the nutritive value of the TMR remaining in the feed bunk. For group-fed cows, this may be detrimental. For example, it hurts those that do not have access to feed at the time of delivery when there is high competition at the feed bunk. In such cases, these cows may not have adequate nutrient intake to maintain high levels of milk production. Every effort should be made to reduce the sorting of your TMR.

Water works with dry TMR
It is commonly believed that adding water to a dry TMR will help bind particles together, making it harder for cattle to sort out smaller particles, thus, promoting the consumption of a more consistent ration.

In 2005, researchers from the University of Wisconsin demonstrated that the amount of feed sorting against long-ration particles was reduced, neutral detergent fiber intake rose, and milkfat percentage improved, when water was added to a dry TMR containing a high proportion of dry forage. The added water reduced ration dry matter (DM) from 81 to 64 percent.

We similarly found that adding water to reduce a TMR from 62 to 52 percent DM resulted in a lesser degree of sorting for the smallest particles. These rations tested were drier than typically utilized for high-production herds, particularly those utilizing no dry forages in their TMR.

Sorting varies with moisture
In two other studies at the University of Guelph, Kemptville Campus, we investigated the effects of water addition to a TMR containing only haylage and corn silage forage sources of lower initial DM.

In both studies, we found that adding water to these higher moisture TMRs, containing no dry forage, resulted in more feed sorting. In addition to this, water added to the rations also resulted in lower DM intake (DMI). Reduced DMI with lower dietary DM was likely due, in part, to the filling effect of higher moisture rations. In fact, in those studies cows on the wetter rations were consuming more "as-fed" feed, but were consuming less total DM.

In the second study we found that adding more water to the TMR elevated feed temperatures in the hours after feeding, particularly with higher ambient temperatures. Heating would indicate feed spoilage and, thus, may be contributing to the reduced DMI observed.

These results may have been further compounded by the face that feed was only delivered once a day in those studies. Previous research has shown that sorting is more prevalent when cows are only fed once a day as compared with more frequent feed delivery.

Liquid feed works, too
An alternative to adding water to TMR may be to add a liquid feed. Liquid feeds, particularly molasses-based ones, have the potential to help bind ration particles together and make sorting more difficult.

In a 2009 study from The Ohio State University, it was found that using a molasses-based liquid feed reduced sorting of a corn silage-based diet at 52 percent DM. Similarly, we recently found that adding 4 percent of a molasses-based liquid feed to a corn silage and alfalfa haylage-based TMR, with a 51 percent DM, resulted in less sorting against the longest ration particles. Further, in that study we found DMI was 5.1 percent higher, and cows produced 7.8 percent more milk (fat-corrected at 4 percent) on the liquid feed diet.

A more recent study by The Ohio State University reported no effect of adding liquid feed on sorting behavior. However, those researchers used a ration that was greater than 64 percent DM. These studies suggest that the usefulness of adding a molasses-based liquid feed on reducing feed sorting may be enhanced in rations of greater moisture content.

The effect water or liquid feed addition has on reducing feed sorting may hinge on the original DM content of the ration and whether or not dry forage was included. In situations where sorting is evident, try adding water or a liquid feed to TMR. However, you must be careful to monitor the effects that this may have on both sorting and DMI.

Make the most of this year's corn silage
2022 Webinar Archives
Related to:
nutrition, TMR
In Nutrition

We can feed for fertility
By Trevor DeVries, University of Guelph