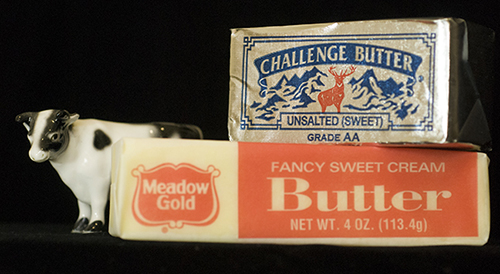 U.S. butter usage in 2013 hit its highest level in 40 years, due in great part to growing publicity about the negative effects of trans fats commonly used in margarines.

How yummy is that news?

According to the American Butter Institute, butter usage in 2013 was 5.6 pounds per person - the most since the early 1970s and an increase of 25 percent in just 11 years.

That's great news for the dairy industry, but let's put things into a more candid context. Butter usage bottomed out at 4.1 pounds per person in 1997. While the 2013 figure was 36 percent higher, the difference amounted to only 1.5 pounds per person. Before World War II, butter use averaged over 18 pounds per person, according to the Los Angeles Times.

Although cheaper, margarine has fallen out of favor as scientific evidence mounted that trans fats cause "bad cholesterol" levels to rise, which in turn led to the Food and Drug Administration to announce last November that they are not safe for use in food.

An even more enjoyable aspect of this story for dairy producers may be what is happening to margarine sales.

World Wars I and II saw greater use of margarine due to shortages of real butter, and the repeal of margarine taxes and other rules in the 1950s opened the floodgates. Butter usage slumped and margarine sales soared.

All that began to change, however, in the early 1990s. Margarine was bumping along at about 11 pounds per person and butter was flat at just over 4 pounds. Except for a blip in 2006-07, margarine has been going downhill ever since.

Butter caught margarine in 2005, re-caught it in 2007, and continues to pull away today. While butter usage is closing in on 6 pounds per person, margarine has dipped below 4 pounds.