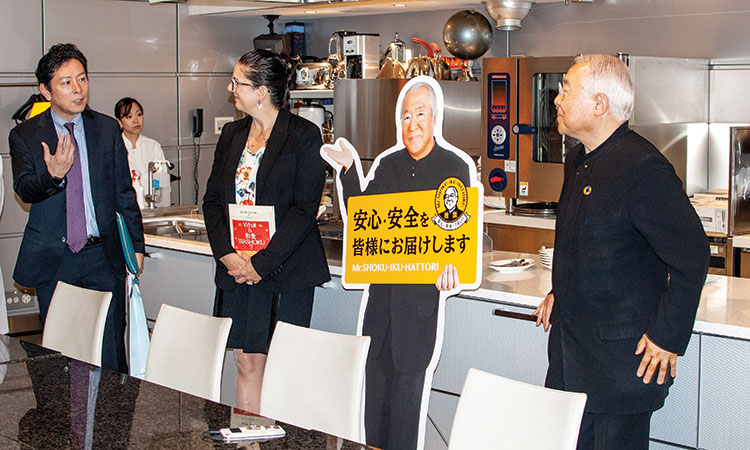 The Hattori Nutrition College is one of the many new partnerships developed by the U.S. Dairy Export Council. It’s founder, Dr. Yukio Hattori (far right), has added a course on incorporating U.S. dairy products into its nutrition and cooking curriculum. USDEC’s Hisao Fukuda and Dairy Management Inc. board chairwoman Marilyn Hershey (left) are shown discussing the partnership.
You can always go home.

In the case of Hisao Fukuda, home meant returning to his original vocation: working for the U.S. dairy farmers.

“I knew Tom Suber well,” said Fukuda of the U.S. Dairy Export Council’s president for the first 21 years of the organization’s existence. “We planted many seeds in the 1990s,” he noted, recalling the collective team’s efforts to market U.S. dairy products in Japan.

“Looking back, I can definitely see those seeds are now sprouting,” said Fukuda of his work with the U.S. Dairy Export Council (USDEC) and an organization called Uniflex Marketing that previously represented the National Dairy Board. Fukuda was instrumental in helping introduce U.S. cheese to the Japanese market and designing Japan’s import system for whey protein.

After that career-launching job, the one-time Japanese foreign exchange student to the U.S. went on to work for USDA, supporting efforts related to beef exports. “In that role, I even translated material for USDA Secretary Tom Vilsack,” said Fukuda.

As others recognized his talents, Fukuda was tapped for a new role as CEO of the Japan Foodservice Association. In the U.S., the equivalent organization would be the National Restaurant Association and its 500,000 members. In this new role, Fukuda further explored the intricacies of Japan’s food culture where half of all meals are eaten outside the home.

“While working at the Japan Foodservice Association, I learned that USDEC hired Tom Vilsack to be its new CEO and president,” said Fukuda, who earned his college degree at Cornell College in Mount Vernon, Iowa. “I was surprised . . . pleasantly surprised . . . to learn of Secretary Vilsack’s hire. Japan should be the first place he visits in his new role,” he thought.

And so Fukuda reached out to the new leader of USDEC. Secretary Vilsack accepted the invitation to speak at the Japan Foodservice Association’s annual meeting. It’s that rekindled connection that brought Fukuda back to his original vocation at USDEC as the organization looked to roll out its “Next 5 percent” strategy to grow dairy exports from 15 to 20 percent of U.S. milk production. It would do so through a three-step process that involved more people, more partnerships, and more programs.

Hisao Fukuda is just one of the many new hires as USDEC looks to grow its footprint. Japan and China represent the world’s two largest cheese importers, so it’s natural to step up efforts throughout North Asia.

Martin Teo and Su Yong Lee, also new hires, are based out of Singapore. They have experience with Pizza Hut Asia Pacific, Papa John’s International, and Cold Storage Singapore. Another growing market is the Middle East and North Africa (MENA) countries. Karim Chachati and Firas Zahreddine joined the team and are based out of the United Arab Emirates and Lebanon, respectively.

These existing USDEC teams, along with the new talent, will deploy the additional partnerships and programs. The extra talent became possible when state and regional dairy promotion groups agreed to fund the additional activity.

Collaboration through partnerships can be the secret sauce to sales growth. That’s especially true when you get others to talk about the positive virtues of your products. Such is the case with the Curves franchises based in Japan. While Curves participants may not be dairy people, they are protein people. It’s this protein connection that makes a partnership with U.S. dairy farmers possible.

Curves is the largest gym chain in Japan. Its small, community-based franchised gyms cater specifically to women. Its core audience is middle-aged women who have a growing concern about quality of life . . . especially as they age.

The average life expectancy of a Japanese woman is 87 years old — the longest in the world. This longer life expectancy is due in part to healthier eating habits and reduced weight carried by the average citizen. However, in later years of life, many of Japan’s women enter assisted living facilities because they simply lack the muscle strength to carry out daily activities.

To combat this trend, many middle-aged women have been taking action and physically working out more often. As part of this regime, these same women have bolstered their intake of protein to maintain and even build muscle mass. For many of the Curves clients, this includes consuming 30 grams of whey protein on a daily basis in the form of a shake. That whey protein comes from America.

To foster the sales, USDEC staff holds “train-the-trainers” sessions to amplify messages about U.S. dairy proteins’ healthy aging effects with gym trainers. These days, about one in three women who work out at Curves purchase the Curves “Super Protein” whey protein product. The Japanese Curves team has been so successful that it was just awarded the master franchising rights for all of Asia.

The Curves partnership is just one example of USDEC’s efforts on the teamwork front. Also in Japan, the Yokohama Sports Association and its Kinkatsu workout regime mirrors Curves’ purpose of combining regular exercise and protein consumption.

Across the Sea of Japan, USDEC is working with China’s Jiangnan University to accelerate commercialization and innovation of Chinese-friendly products that incorporate U.S. dairy products. One of its many efforts includes developing noodles with a high protein content. In neighboring South Korea, USDEC is working with Nutriand and KDA to bolster whey protein content in meals served in schools and hospitals.

For those who watch the cable television show “Iron Chef” on the Cooking Channel, chances are you have seen Dr. Yukio Hattori, who is a food scholar and founder of Tokyo’s Hattori Nutrition College. On the widely successful show that started in Japan and made its way to America, Hattori narrates the cooking action on the floor. When not carrying out his role as a television personality, Hattori leads the Hattori Nutrition College that he founded years earlier.

Each year the school instructs some 1,200 students in the art of culinary skills and nutrition. Holding a medical degree, the Japanese chef also includes a nutrition-based curriculum.

Graduates of the Hattori Nutrition College often are employed in the restaurant and food service sectors. Its graduates can be found in 59 countries around the world.

These days, aspiring chefs at Hattori Nutrition College also take part in a one-week course focused on incorporating U.S. dairy products into menus. As the culmination of the week’s activities, teams comprised of four student chefs each prepared entrees and were judged based on their cooking talents. After the judging, prizes were awarded to the top teams.

“This year’s top entry was a stacked hamburger with melted cheese cascading down the sides like a volcano,” said Jeff McNeill, who serves as director of USDEC’s Japan office.

Similar partnerships and associated programs are budding throughout North Asia due to efforts by the U.S. Dairy Export Council and its local teams.

“People are just over the moon that we are offering these instruction opportunities,” added Angélique Hollister with USDEC.