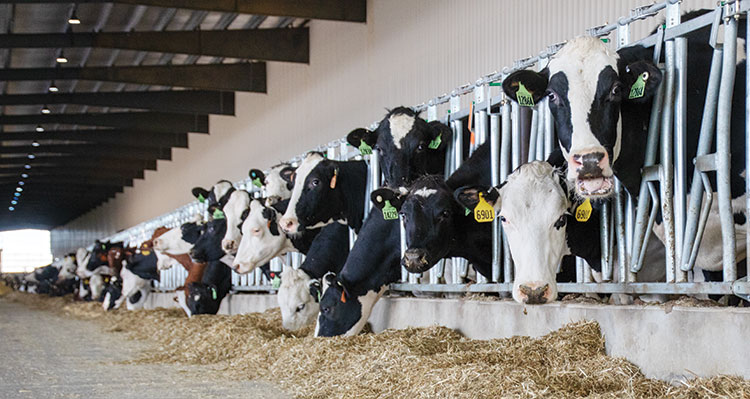 Modifying physical characteristics of the dry cow ration can influence both cow behavior and health through the transition period.
Researchers have demonstrated that controlling energy intake prepartum, specifically by targeting nutrient consumption to maintain a consistent body condition, may reduce the subsequent risk of ketosis and other health issues postcalving. As result of this research, feeding of so-called “controlled-energy dry cow diets” has grown in popularity within the dairy industry.

These diets typically include a significant proportion of low nutrient dense ingredients, such as wheat straw or poorer quality hay, and are designed to help dry cows maximize their intake, particularly in volume. At the same time, these diets control the amount of total energy consumed and minimize the risk of excessive body condition gain. This, in turn, has potential postcalving benefits, including greater rumen capacity at calving, which results in greater dry matter intake (DMI) through the early postpartum period.

While such diets are beneficial for promoting improved energy balance after calving, from a cow behavior standpoint, one potential area of concern with such a feeding strategy is the marked differences between the prefresh and postfresh diets. These prefresh diets are bulky and lower in energy, while the postfresh diet is usually a denser, greater energy diet with smaller average particle size. Given these differences in both the physical and nutritional composition of the dry cow and fresh cow diets, an associated lag in DMI that is often observed in early lactation is not necessarily surprising.

Specifically, researchers have demonstrated that cows take anywhere from seven to 14 days to adjust their DMI in response to a dietary change — much of this adjustment is related to changes in digestion and metabolism. However, some of it may also be related to eating behavior changes. From a cow eating behavior standpoint, a potential method of improving consistency in intake from pre- to postpartum may be to make the dry cow ration and the fresh cow ration appear similar in physical composition to the cow.

Achieving this type of physical similarity may be particularly challenging with controlled-energy dry cow diets that contain a large proportion of straw. Straw is a dry, bulky forage. If particle size is too long, high inclusion rates within a dry diet may slow passage rate from the rumen and limit DMI too much.

Further, diets that contain a high proportion of dry forage, particularly with long particle size, are also more prone to sorting. Sorting compromises the balance of nutrients that cows consume relative to what the diet is formulated for. Furthermore, sorting behavior also reduces the nutritive balance of the feed that remains in the bunk throughout the day.

This, in turn, may result in inconsistency in what cows consume, both within a cow and between cows. Since the goal of controlled-energy dry cow diets is to promote consistent and high volume consumption, minimizing the risk of feed sorting is a critical component to the success of these feeding programs. From a practical standpoint, many farms are challenged with getting particle size of straw in their dry cow diets short enough to minimize the risk of sorting and promote consistent, high consumption.

Another factor that has the potential to influence intake consistency across transition, particularly of dry cow diets high in straw, is the moisture content of the ration. In research by our group and others, it has been demonstrated that lactating cow diets, especially those above 60 percent dry matter and those containing dry forages, are most easily sorted.

Those rations benefit from the addition of water to help bind the particles together and raise the bulk density of the ration making it more difficult for cows to sort. Although not previously studied, dry cow diets that are high in straw and low in moisture content would be expected to be more prone to sorting.

Our research group at the University of Guelph recently conducted two studies to determine the effect of feeding high-straw dry cow diets that more closely resemble lactating cow diets in terms of physical characteristics. This was achieved by reducing straw particle size and adding water to raise the bulk density. We predicted that these ration modifications would not only reduce sorting and elevate intake during the dry period, but also carry over to improve energy balance and rumen health in early lactation.

In the first study, we looked at the effect of straw particle size on Holstein cows fed a one-group dry cow total mixed ration (TMR) that contained (on a dry matter basis) 36% corn silage, 35% dry cow pellet, and 29% wheat straw. The straw was chopped in a tub grinder with either a 1-inch (2.54-cm) screen or a 4-inch (10.16-cm) screen.

As was predicted, those cows fed the dry diet with shorter straw sorted that diet less extensively against the longest dietary particles than cows fed the longer straw diet. The greater sorting of the longer straw diet did not only change the composition of the diet consumed relative to what was expected, but we also observed that the diet was consumed slower. That may have contributed to a lower overall DMI of that diet, compared to the dry diet with shorter straw.

The difference in DMI was most evident during the week prior to calving. During that week, cows fed the longer straw diet exhibited a faster decline in intake in the days leading up to calving, while cows fed the shorter straw diet were able to maintain more consistent intake over that time period. Despite no differences in feed consumption amounts postcalving, we observed that cows fed the longer straw diet had greater blood beta-hydroxybutyrate (BHB) levels in the third week postcalving compared to cows fed the shorter straw diet. Those cows also had a greater average maximum level of BHB. These results indicate that the cows may have been experiencing a greater extent of negative energy balance in early lactation.

We also discovered that those cows fed the longer straw dry diet had poorer rumen health in the first week postcalving, as evidenced by a more rapid drop in reticulorumen pH during that time period. These metabolic effects are most likely attributable to the differences between our treatment groups in consistency of intake, both in amount and composition, particularly in the week leading up to calving.

In a follow-up study, we tested the effect of dietary moisture content on Holstein cows fed a one-group dry cow TMR that contained (on a dry matter basis) 41% corn silage, 23% dry cow pellet, and 36% wheat straw (chopped with a 1-inch screen).

Postcalving, those cows that were previously fed the dry diet with greater moisture content also experienced a more stable and overall greater reticulorumen pH. That was indicative of fewer cows experiencing subacute ruminal acidosis, particularly during the first week postpartum.

The results of these studies highlight the importance of making high-straw, controlled-energy cow diets more physically similar to lactating cow diets. Specifically, by minimizing straw particle size and raising moisture content through the addition of water, we can promote greater consistency in the amount of targeted nutrients consumed during the dry period. This may translate into improved energy balance and greater rumen health in early lactation.

Find the super-shedders in your barn
By Trevor DeVries, University of Guelph