Forage quality drives milk production. And the only measure of forage quality that truly matters is the quality of forage that actually reaches the mouth of the cow. That cowside measure is determined by three major factors: when you start harvesting, how long it takes (start to finish) for you to harvest, and how much quality is lost during harvest/fermentation.

When you harvest is decided when you pull into the field. Meanwhile, the latter two are dramatically affected by how you harvest.

How long does it take . . .
Many farms start harvest on time, though not all finish on time. Each day harvest is delayed past the optimum date, you are losing $3,000 per 100 cows in forage quality. Our on-farm research found that same-day hay silage is easily achievable on all cuttings even with poor drying conditions.

Every hour forage sits at high moisture in the field, more digestible components are consumed by respiration. When more respiration occurs in the windrow, it takes longer for fermentation to occur in the silo or bag. This action reduces the amount of milk you can produce from your forage. The solution? Shorten the drying time.

How you harvest makes a difference. The drying rate (Graph 1) is influenced greatly by the amount of sunlight reaching the swath. The amount of sunlight hitting the swatch is directly determined by swath width. Swath width, in turn, affects swath temperature which impacts air temperature over the swath and the vapor deficit (warmer temperature lowers humidity). These are the top four issues that effect dry-down as shown in Graph 1. Dry-down can lag behind due to higher humidity in the swath, and swath density delays drying. 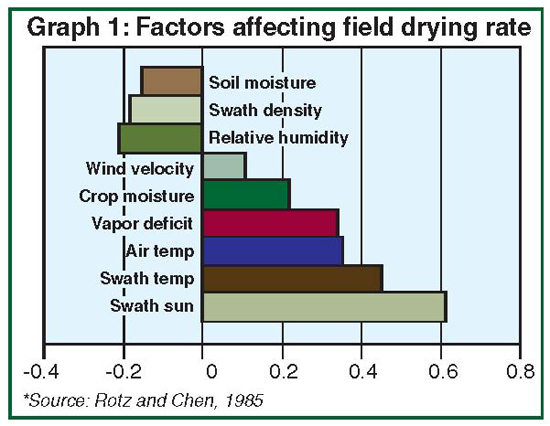 Wide swath may be the answer . . .
Traditional hay silage harvesting techniques place forage in a narrow swath. But is this the proper approach? By opening the mower-conditioners to place forage in a nearly full width swath (as for dry hay), the hay surface area is increased nearly three-fold. The wide-swath hay receives more sun, boosting the four major drying factors shown in Graph 1.

To see if wide-swath hay would work for hay silage harvest, we conducted a series of field tests in 2003. During our study, fields received above normal rainfall and fields had high soil moisture levels. In each study, alternating rows of wide and narrow windrows were mowed so we could have direct comparisons. We recorded field and swath conditions by using continuous recording data loggers for temperature and humidity. These devices were inserted in the bottom center of each swath. We looked at first-cut alfalfa, and secondcut intensively managed bromegrass. We cut and harvested on the same day for wide-swath hay silage and next day for the narrow.

The results from the data loggers showed that hay drying predictors were accurate. Swath core temperatures were significantly higher in the wide swath compared to the narrow (Graph 2). It is the equivalent to having your own personal drying oven on each row. The higher temperatures reduce the relative humidity in the swath, allowing for the moisture to rapidly leave the forage. The nearly three-fold boost in surface area for the wideswath hay compared to the traditional narrow swath allowed this moisture to escape easier. 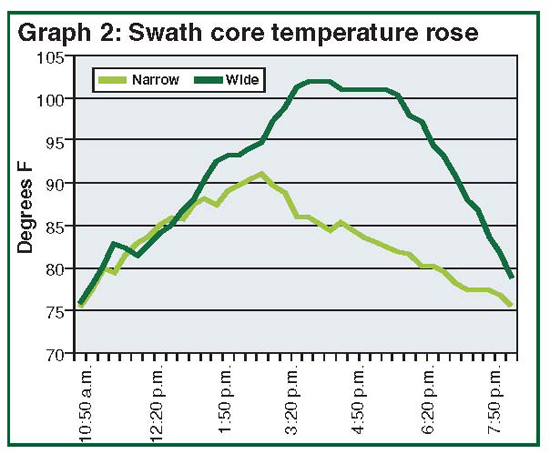 Greater forage consistency is another direct benefit of wide-swath hay. When looking at the narrow rows at chopping, we found the hay was dry on the outside while as wet as newly mowed hay on the inside. The average moisture was 65 to 70 percent. This is like being at average temperature when your head is in an oven and your feet are in a freezer! At Marty and Pat Hanehan's farm in Saratoga Springs, they found by switching to wide swath, the hay silage in the bunk was very uniform consistency throughout. No longer did compressed plates of wetter silage occur throughout the bunk.

The clearest indicator of success was the production of 65 to 70 percent moisture hay silage the same day it was mowed (Graph 3). In each of these tests, we achieved the short (hay silagein-a-day) drying time without moving the swath.

In our test on later cuts, the forage was ready to chop in less than three hours without moving the swath. Farms that use wide swath on second and third cuts report raking or merging as soon as the mower pulls out of the field. The chopper then chases the rake removing the forage shortly after. 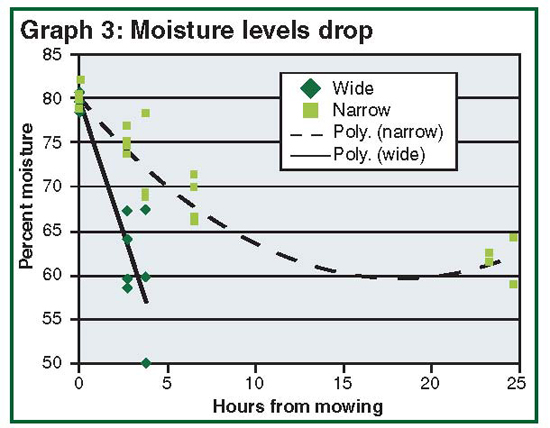 Ken Herrington, of Herrington Farms in Brunswick,N.Y., reports that, by drying to 75 percent moisture and then merging multiple windrows into one, the disturbance of the swath rapidly drops the moisture below 70 percent. This reduces the time between mowing and chopping even further than the dramatic reduction we had in our tests.

More milk per ton . . .
The wide swathing, and subsequent rapid drydown, allowed forage to reach the silo with minimal respiration and less consumption of nutrients needed to make milk.

The narrow and wide samples started at the same level when fresh cut. Surprisingly, the wide swath consistently rose in milk potential after it was cut. Speculation is that the greater amount of plants exposed to sun continued to photosynthesize, adding digestible components. In both examples, as with others we conducted, the invitro total digestible dry matter was significantly higher by conserving nutrients through the wide swathing. Nearly all the quality components were conserved by the rapid dry-down of wide swathing. This resulted in a significant conservation of milk-producing potential as can be seen in Graph 4. The nearly 300 pounds more milk in each ton of wide-swathed harvested dry matter means nearly $40 more in your pocket. 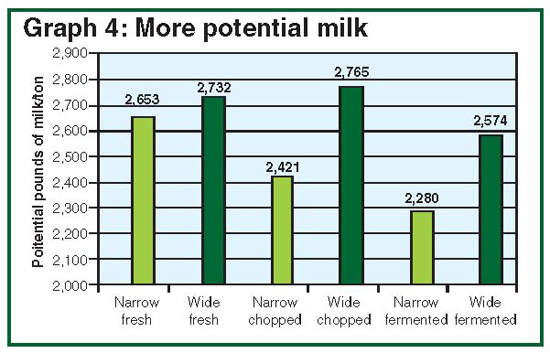 The impact of wide swathing and its conservation of digestible components carried over as a beneficial enhancement of the fermentation process.Wide swath consistently produced greater lactic production over acetic which resulted in significantly better lactic/acetic ratio after fermentation. The higher substrate for the bacteria allowed for a significant drop in pH for greater long-term stability of the feed. The rapid fermentation and shorter interval from cutting to complete fermentation significantly reduced the protein breakdown. This was measured by the reduction in ammonium-N of total N which is an indicator of the breakdown of complex proteins into simpler compounds.

The bottom line . . .
In each of these tests, we achieved the short (hay silage-in-a-day) drying time without moving the swath. Farms of 45 cows and of 515 cows have both been able to implement the system, enabling them to feed over 60 percent forage diets while maintaining high milk production.

The biggest problem of implementing the system is mentally and operationally changing how you approach this system. You have to figure out based on your farm and your equipment and labor how long it will take to harvest. Then only mow what you can get in the silo today. Note, mowing and leaving forage overnight will eliminate the conservation of milk potential. 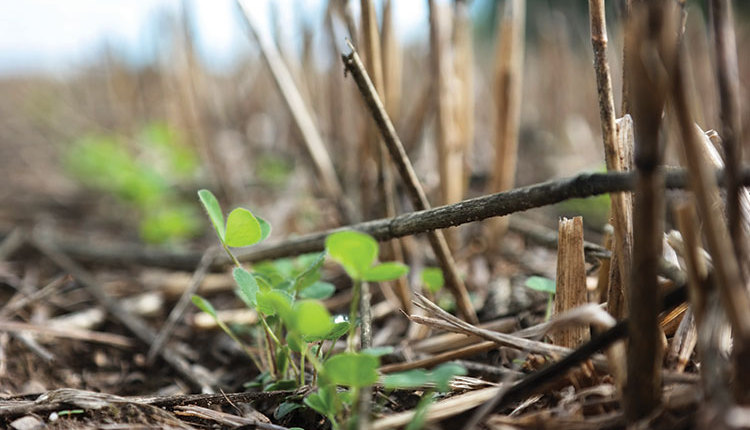 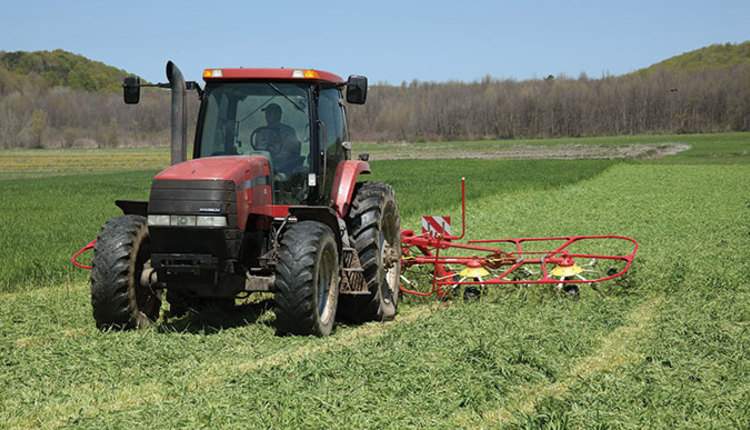 Crops and Forages
Quality only counts when it reaches the cow 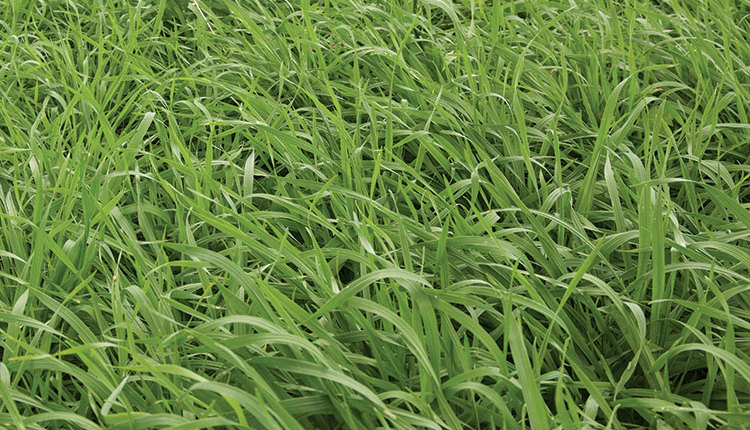 Features
The new crop on the block
comments powered by Disqus